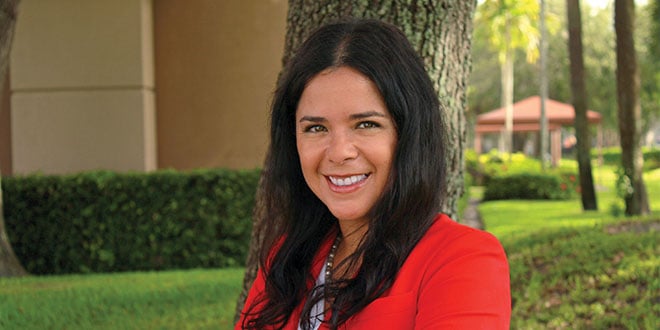 The key to Natalia Gamarra’s professional success has been a mixture of perseverance, discipline, studies and a lot of networking.

Since September 2018, Gamarra joined the team of United Fresh Produce Association in Miami, as Manager, International Member Services, a job she obtained precisely for her perseverance, knowledge and the power of “networking”.

“I traveled to an event in San Antonio, Texas, I paid with my own resources and there, I spoke with a United Fresh executive and told him that I really wanted to work with them, which could be of great value to the association, because of the great experience I had gained working previously with the Produce Marketing Association, that was my initial contact,” Gamarra said in an interview with Abasto.

For three months, Gamarra kept in touch with United Fresh until she was finally called for an interview and given the job. ” One of the people who interviewed me said that something that greatly influenced the decision to give me the job is that I’m perseverant.”

This has been a constant in her life, since she was a child when she lived in Posadas, her hometown in Argentina and then when she traveled to the United States, at the age of 21, with the purpose of improving her English skills.

Although her plans were to return to work in Argentina, the lack of opportunities in her country forced her to stay in the United States, far from her entire family.

Gamarra obtained a student visa and to survive, she divided her time working as a waitress, nanny and cleaning houses, to pay for her business administration studies specializing in marketing and international business at Peirce College in Philadelphia, where she graduated with honors.

Her sacrifices paid off. After her graduation in 2006, she found work as a receptionist in a company and in her spare time she was engaged in networking to meet professionals and make contacts and thus managed to open doors that helped her advance her career.

Between 2008 and 2011 Gamarra had his first contact with the food and beverage industry when she worked for two logistics companies. To continue growing professionally, Gamarra continued her studies and obtained her master’s degree in international business, which helped her to get a job at the Convention and Visitors Bureau of Philadelphia as international tourism sales manager, where she also put into practice her knowledge of four languages, Spanish, English, Portuguese and Italian.

“That’s why it’s worth mentioning that the study opens doors and increases your salary, that’s why I’m a person who advocates for studies,” said Gamarra.

For her outstanding work and relationships with the community, Gamarra was recognized as one of the most influential Latinas in the Delaware Valley in 2012 and received the Pennsylvania Multicultural Leadership Award from the National Diversity Council.

After her successful job at the Philadelphia Convention Bureau, in 2015 Gamarra was hired by the Produce Marketing Association as manager of global business development, where she continued to expand her passion for international business and the food industry, but due to personal changes in her life, she decided to move to Miami.

Her desire to continue her professional growth in a produce association led Gamarra to identify United Fresh Produce Association as the ideal place to work and thanks to her perseverance and knowledge, she was hired in September 2018.

“I see a future with a lot of growth, I am very happy to work in an industry in which we really care about people, what they eat, business, always aware of what is happening in the industry and about advancing in my studies my goal is, later on, to obtain a doctorate in international relations,” concluded Gamarra.