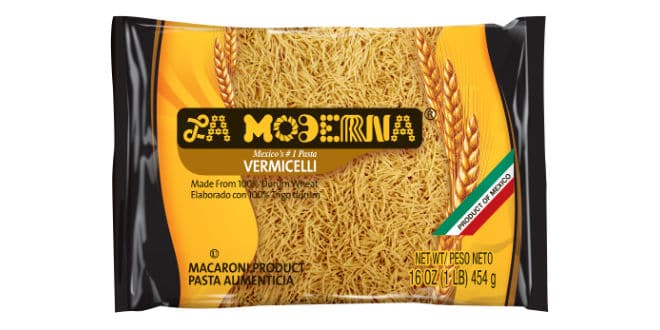 With a history of nearly 100 years group the modern is not only positioned as “No.1 pasta in Mexico”, but it has placed as one of the most important national companies to be part of the list of 50 major industries throughout the Mexican Republic. This recognition has been given thanks to a constant and arduous work to carry household products based on best quality wheat.

La Moderna is currently the pasta more sold and consumed in Mexico. According to the company, it is estimated that they have a 75% market share. According to Esteban Abascal, export manager of La Moderna, this degree of recognition must be to the long tradition of the company and its commitment to deliver to consumers products of the highest quality that have fed the Mexican families for generations.

The modern was born in 1920 in the city of Toluca, State of Mexico, with the grinding of wheat. Subsequently, in

In 1959 the company was acquired by don Eduardo Monroy, whose family is the current owner of the Grupo La Moderna. Following the constant growth in Mexico and after consolidating as the paste number one in the country, the company wanted to expand their horizons and the market par excellence was in United States. For this reason, they began exports in 1980.

to their tables. “They wanted that they could find the products that will remember them to their native Mexico”, said Abascal. “It was a complicated process with many challenges.”

Francisco Usobiaga, export Director of the modern, was responsible for the difficult task of initiating this plan, that decades later, would consolidate the company as the favorite of the Hispanic market in the United States. He explained that at the beginning had some problems regarding the presentation of the product since the traders did not know

How were they going to sell a black gasket with yellow paste? However, a chain of supermarkets in Chicago opened you the doors and such was the success that other stores started them to request the product.

some small chains especially in California, Texas and Chicago”, said Abascal. Currently, thanks to its subsidiary in the United States, Interamerican Foods, La Moderna has ability to reach all corners of the country.

The modern has six plants of pasta over Mexico that supply its two distribution centers in USA, located in Laredo, Texas, and Calexico, California. However, the latter will be transferred to a new plant distribution in Riverside, California, which will improve your entire operation.

In addition, by the end of the year, the company will open its first factory of pasta in the United States. It’s a modern facility near Dallas, Texas, which have been developing for three years. This will feature two production lines that will be able to produce more than 3,000 kg of pasta per hour each.

“This plant will give us the possibility to compete with United States pasta and offer a product at a better price,” said Abascal. “Also with this new plant we can supply the United States market and those of Mexico will focus on supplying other markets, since we have exports to 18 countries.” In 2015 the modern exported more than 46,000 tons of products to the United States, of whom 40,000 were pasta, and the other 6,000 were wheat-based products. According to Abascal, between the modern Hispanic is the favorite pasta brand, since it is estimated that the participation in this market is approaching 80%.