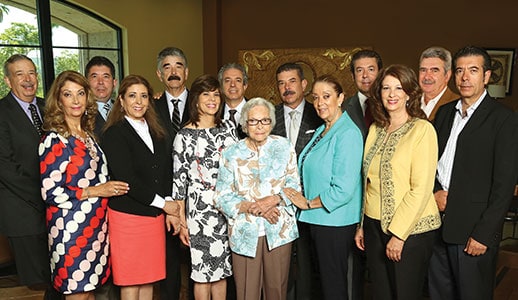 When Don Miguel González Jimenez immigrated to the United States thinking he would only stay one year to pay his debts in Mexico, he never imagined he would leave a family legacy (Northgate Markets) that would help thousands of families have a better life.

Oscar González, the youngest of 13 brothers, recalls how his father, Don Miguel, immigrated to Huntington Park, California in the early 1960s.

“My father came from Jelostotitlán, Jalisco. He had been a shoemaker his whole life. However, he lost his business after an unfortunate fire that left debts and concerns about how he would go about to support his family.

So he decided to immigrate to the United States with two of my siblings, aged 15 and 16 years respectively. Meanwhile, my mother (Teresa Gonzalez Reinoso) stayed in Mexico with the other 10 children,” said González.

Although Don Miguel immigrated with the idea of being in the United States for a short time, he returned to Jelostotitlán each year to be with the family.

He made this recurring trip until one day his mother mandated that the family remain together, either in México or in America. “And with God’s blessing, we all immigrated in 1976. “

Oscar’s father had always been a businessman. It was no surprise that his brother Michael, the third of 13 siblings, convinced the family to open a business in the city of Anaheim with the idea that all the children could work.

“At first my father rejected the plan. Then he decided it was a good idea. He took out a loan and bought a liquor store in the city of Anaheim, which opened on January 2, 1980,” Gonzalez said.

He remembered how the thriving business always closed up late. This situation proved to be dangerous. One night, a regrettable incident happened.

From Liquor Store to Northgate Markets

“A gunman stormed the liquor store. My mother decided to close early and not sell any more alcohol. She replaced the product with vegetables and legumes and introduced a meat department, transforming the business into a small market,” Gonzalez said.

This is how the idea of a Latino supermarket was born introduced. It would be a business where Hispanics would find products from their country. Furthermore, it would be a place where they would feel comfortable and where they were attended to as if they were in their own homes.

In the 1980s, it was a blessing to experience the great immigration of Hispanics into the U.S. The phenomenon gave the family the opportunity to succeed in a very short time. As a result, the Northgate supermarket began to profit.

At first, the family only intended to make improvements to the existing business. Then the opportunity arose to open other stores. “After the second and third supermarket was opened, we were inspired. It gave us the energy to grow and develop. Every project we took on started transforming with more formality and structure.”

When Don Miguel Gonzalez and his son Miguel bought the first business, it was already called Northgate. At first, they did not have the money to change the label. When they finally had the capital, customers already recognized the name. In fact, translated into Spanish, the name takes on an even greater significance: ‘La puerta del norte’.

For that reason, the González family decided to call their 40 stores ‘Northgate Markets.’ They are located in Southern California, Texas and Arizona.

Today, Northgate Markets is the largest chain of Mexican supermarkets in the United States. They have developed their own brands, pleasing their customers each and every day with unique, high-quality products that cannot be obtained in other stores.

Growth has not only taken place in the company’s stores. In fact, the business has departments specializing in marketing, technology, real estate, design, and construction.

An exclusive interview with Miguel Gonzalez, owner of Northgate Markets. He talk about the American dream, his family, and plans for the market and the community.

The company has also successfully developed Northgate University, a program that has three main focuses.

The first focus is on education. For seven years Northgate has managed to provide over half a million dollars in scholarships to all Northgate associates and their families. Also, through the WAFC organization (Western Association of Food Chains) Northgate contributes to a program at the University of Southern California.

‘To Your Health’ (‘Que viva la salud’) is the second focus. Its goal is to make healthier products available to customers. This second focus teaches about healthy ways of eating and how to enjoy a healthier life.

Thanks to the success of this program, the Northgate chain was awarded the distinction “Community Leaders” by First Lady of the United States Michelle Obama. The First Lady visited Northgate Market four years ago.

The third focus of Northgate University is faith. It supports families and contributes to the community in all churches, inspiring everyone to pursue their dreams.

“Over the past 25 years, we’ve had the custom of meeting every Wednesday for lunch. It reminds us that we are brothers and sisters first and partners second.

We are also reminded that this business is growing and that it’s not just ours. There are 6,000 employees who depend on us and our decisions. That gives us more responsibility,” concluded Gonzalez.