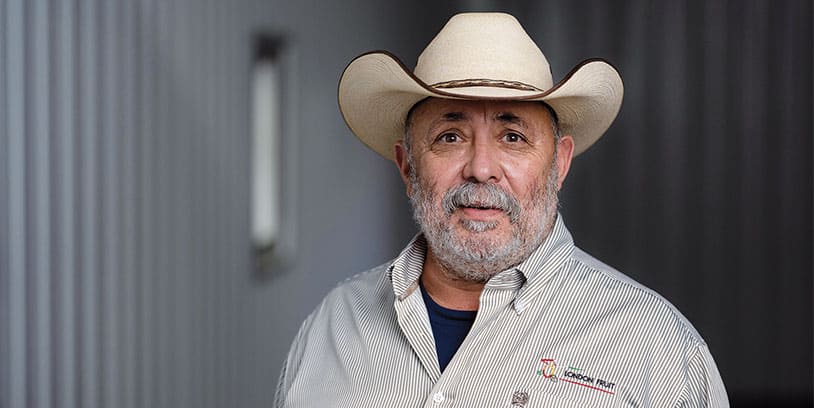 Jerry Garcia’s life, the rancher, not the guitarist leader of the Grateful Dead band, has revolved around agriculture. Since his youth, he helped grow vegetables and tend cattle on his parent’s ranch in Texas. Now at age 60, he is the co-owner and vice president of London Fruit, a 40-year-old fresh fruit distributor.

Jerry was born in Texas, but he is deeply rooted in the Mexican culture, not only because of his ancestors but also because he lived 15 years in Michoacán. He had his vegetable crops and worked in mango marketing, becoming an expert in producing and distributing this fruit.

In a telephone interview with Abasto, Jerry talked about his passion for his work, life as a rancher, and future plans.

“My younger brother worked with London Fruit, and I then had a lot of rancher friends in Mexico who had their mango orchards. They would ask me if I could get an American company to buy the product, and that’s how I started at London,” Jerry explains about how he became connected 30 years ago to the fruit distributor.

Jerry expresses himself with an infectious enthusiasm that reflects how he has marked his path to success. He assures that thanks to being in the right place, at the right time, he had the opportunity to become a partner of Barry London, the founder of the company, which has its warehouse very close to the border in Pharr, Texas.

“In about 2004, they talked to me about coming from Mexico to Texas to help them here at the warehouse. One thing led to another, and one Sunday, we lost the salesmen, so on Monday, I told Barry London, what I know is to work, and that’s what we are going to do. So, I started selling; that’s how Jerry Garcia’s story with London Fruit began on this side (of the border). Barry liked what I was doing and offered me part of the company,” said Jerry.

With a touch of good humor, he added, “My sister told me, ‘Mr. Smart put the golden handcuffs on you, now you are an owner, and you can’t go anywhere else.

Jerry went from general manager to vice president and co-owner of London Fruit. In the not too distant future, he says he will most likely become the company’s sole owner because his partner plans to retire and sell him his share of the business.

His goal is to continue to prosper in the business of distributing mangos, lemons and avocados while maintaining the quality and freshness of the product they handle.

Aware that times change and that it’s essential to adapt to new trends, Jerry has been concerned about creating a team of young people familiar with using social networks for the marketing of the company and the sales of their products.

The 30 years of working at London Fruit have taught Jerry that a fundamental business need is the honesty with which you should always treat growers and packers.  Now, he is determined to try to change the way fruit prices are set because buyers are looking for lower and lower costs, which jeopardizes the quality of the product.

“At my age, that is my new goal, to convince the big supermarkets that we have to protect the producer,” said the Texan rancher and businessman. In this way, Jerry seeks to reaffirm what he has already proven through his company, that quality is the best way to succeed.