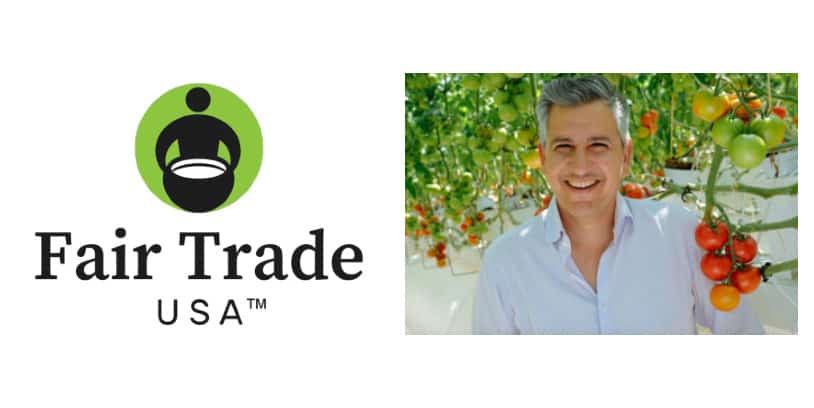 For the first time in Fair Trade USA’s 22 years, the organization elected a Mexican farmer as president of the Board of Directors. Ricardo Crisantes, a respected leader in the organic produce industry, is now in charge of continuing the mission to promote fair trade among the retail sectors.

Fair Trade USA leadership said Crisantes’ appointment reflects the organization’s commitment to elevate the voice and address the needs of farmers and workers, especially as they face continued hardship and rapidly changing market demands during COVID-19.

Crisantes is the commercial director and third-generation co-owner of Wholesum, a family-owned producer and pioneer of organic products in Mexico. He has led fair labor initiatives and implemented fair trade certification on all Wholesum farms in Mexico and the United States.

In an interview with Abasto, Crisantes, born in Culiacán, Sinaloa, talked about his life and how he grew up in a farmer’s family. His grandfather emigrated from Greece and married a Mexican woman, and they dedicated themselves to farming, a work that his father continued.

“My dad has always had this passion for farming, and many summers, I worked with him in the fields. So my dad was very interested in this greenhouse technology and started using that technique,” said Crisantes, who studied business administration and marketing at the University of Southern California.

Since college, he became more interested in sales and marketing of produce. With his father’s support, he started working in a family friend’s company in a fresh produce distribution warehouse. “I came from a university environment, and then I came to this warehouse environment, and although it was difficult at first, the truth is that this experience was great because I learned a lot.”

Crisantes then returned to work with his father in his new greenhouse farm production project. Finally, he settled in Nogales, Arizona, from where he manages Wholesum’s commercial operation.

In addition to his passion for selling organic produce from his Wholesum farms, Crisantes is a fervent believer in fair labor and social justice. Something he says he inherited from his mother.

Crisantes used his sales skills to convince buyers of his products to pay a little more for them and, in return, have the fair trade certification seal. That money is given directly to the workers to carry out projects that benefit the communities where they live.

As president of Fair Trade USA’s Board of Directors, Crisantes is leading the future of fair trade and sees technology as the key to moving forward as an organization.

“Technology can help make global supply chains more transparent and accountable. It allows us to raise consumer awareness of the impact each purchase can have on the lives of the farmers and workers who grow our food. Building better technology into global and local fair trade supply chains will enable us to more effectively increase the impact of fair trade on families, communities, and the environment,” Crisantes said.