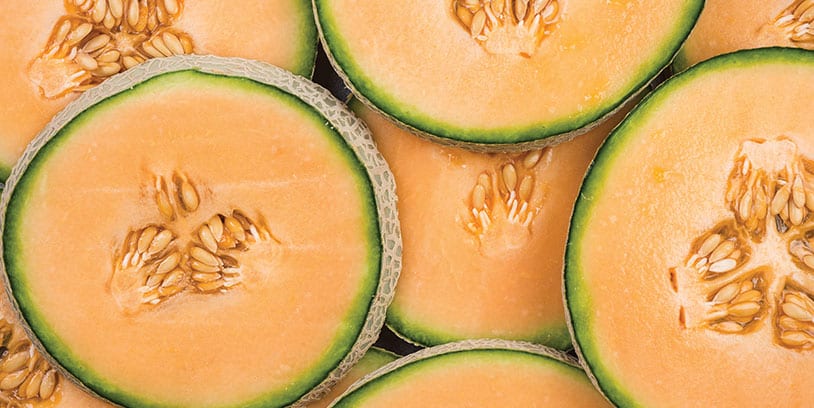 Cantaloupe has been cultivated for more than 4,000 years in various parts of the world. The Greeks were already growing it before the Christian era. Although the origin of the melon is very vague, some authors affirm that the melon is native to Central Asia, while others place its origin in the African continent. In fact, there are representations of this fruit in Egyptian tombs from 4,400 years ago.

Christopher Columbus introduced the cantaloupe to the American continent. It was no bigger than an orange, but it expanded both in size and type over the centuries.

The cantaloupe melon or cantaloupe is spherical, slightly flattened, smooth-skinned and small, has orange flesh, weighs just over two pounds, and is sweet (though not too sweet) and aromatic.

Although it has always been a seasonal summer fruit, nowadays melons can be found practically year-round. Varieties harvested in September and October, often called ‘winter melons,’ can last until Christmas or a little longer.

It is consumed alone as fresh fruit, in salads, freshwater, or as a dessert. Its seeds are also edible. This fruit has been present at the table in the Hispanic culture and used in a children’s song lyrics called “La víbora de la mar” (The sea snake).

Cantaloupe, composed of more than 80% water, is an ideal moisturizer with the advantage of its low caloric intake. The fruit can be consumed in the desired amount without fear of ingesting excess calories or sugars. For this reason, it is especially indicated in weight control diets and diets with specific control of carbohydrates, such as diabetes. Its main vitamins and minerals are Vitamin A, C, K, Vitamin B6, Vitamin B9, Potassium, and Zinc.

In 2014, in the United States, 1.9 million pounds of cantaloupe melons were commercialized, while in 2020, it had commercialization of 1.5 billion pounds, which represents a decrease of 18%, which we can appreciate in the following graph:

81.5% of cantaloupe comes from four main regions, Guatemala with 27% of production, Central California with 26%, Honduras with 15%, and Arizona with 13.5%. These regions complement each other for year-round production, which makes it possible to enjoy fresh melons on the table.

Meanwhile, Honduras, the second-largest exporter of cantaloupe melons to the United States, has grown since 2014 by 116%, especially during the first quarter of the year, going from exporting 91 million pounds to 240 million last year.

There are some myths about cantaloupe, one of them is that it is not recommended to eat it at night. This myth is entirely false since the only real drawback that both cantaloupe and watermelon have when consumed at night is that they may increase the urge to go to the bathroom and break the sleep cycle since they are composed of water.

So, we hope that the consumption of this product will continue to increase, both for its nutritional benefits and that it be consumed in the desired quantities without fear of ingesting excess calories or sugars.