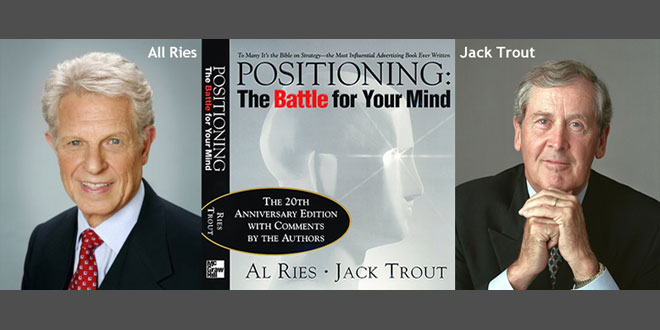 In the summer of 1969 a series of articles on the subject of brand positioning, written by Jack Trout and Al Ries – undoubtedly the best-known marketing strategists in the world – was published in the American magazine Advertising Age, in a column entitled: «The advent of the era of positioning ».

This book split the history of marketing in two: “before and after positioning.”

“Positioning” is the process by which a company offers its products and seeks to place its brand in a unique and relevant position in the mind of the consumer, generating a perception of advantage over competitors.

The authors argue that to reach that favorable position, the fundamental thing is to arrive first. What is the name of the first man who stepped on the moon? Neil Armstrong. And the second astronaut? I do not remember. What is the highest mountain in the world? The Everest. And the second? Do you see where we are going?

But arriving first is not enough, the important idea is to stay permanently in the mind of the consumer and to achieve this it is necessary to add other values ​​to the brand.

The most effective way to add value is to improve the positioning of the organization and the services it offers.

Fifty years after the creation of the brand positioning concept, the model is still in full force and even more relevant for publicity experts, communicators or entrepreneurs who understand the application of the concept, but the reality is different.

In the West, brand positioning became a generic word that people quote indiscriminately, ignoring the depth that the term contains. When Trout said that “anyone can use the positioning strategy to take the lead in the business world,” he never imagined that his creation would reach the frivolity levels he now has in Western markets.

On the other hand, Eastern entrepreneurs see positioning as relevant, because for them it’s a practical concept today, which allows them to place their products and services in key positions in the global economy.

Brand positioning impact around the world

In the last 40 years, China has experienced the most vertiginous growth in its history. From being a manufacturing country, China went on to offer services with added values. This is a clear differentiating factor in its positioning as a brand, similar to what America and Europe experienced in the 1970s when the concept emerged.

17 years ago the eastern businessman Deng Delong acquired the right to apply the theory of positioning in China. After the death of Jack Trout, on June 4, 2017, Delong became world president of Trout & Partners, the marketing strategy consulting firm with offices on five continents, which the American thinker created to apply and market his idea.

On September 24, 2019, Delong and a hundred Chinese company leaders celebrated the 50th anniversary of the positioning in the city of Shanghai, an event where the strategic direction and business philosophy of American thinkers Jack Trout and Al Ries were discussed. While this was happening on the other side of the world, the historic date went unnoticed in the West.