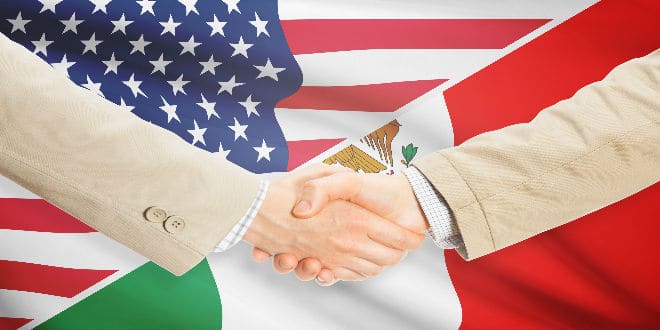 The U.S. and Mexico came to an agreement on a trade deal on Monday that could pave the way to replace NAFTA.

He added that it would help farmers and manufacturers. “We’ve made it better” for both countries, according to CNBC.

“The name NAFTA has a bad connotation because the United States was hurt very badly by NAFTA,” Trump said.

There was hope that a new NAFTA agreement would be ready before December 1st, when Andres Manuel Lopez Obrador replaces President Enrique Peña Nieto. Both Mexico and Americans have been eager to reach a deal by the end of August because it would give them time to notify Congress and have the deal signed by Mr. Peña Nieto’s administration.

“I’m certainly hopeful that we get a good agreement,” Carla Hills, a former U.S. trade representative and chief NAFTA negotiator, said earlier Monday on CNBC’s “Squawk Alley.” NAFTA is “25 years old and it needs to be upgraded. I have my fingers crossed that we’ve done a good job and we get to NAFTA 2.0.”

According to U.S. Trade Representative Robert Lighthizer, the agreement will last for 16 years and will be reviewed every six years. He also said that the plan would keep the steel and aluminum tariffs that are already in place. The deal must be approved by congress.

“We’re very excited about this agreement. We think it is going to lead to more trade, not less trade,” Lighthizer said.

According to CNBC, Trump called Peña Nieto to congratulate him on the negotiations and their outcome.