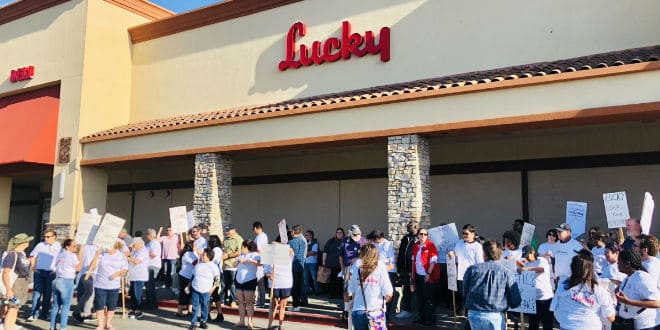 The strike of 3,500 workers from Lucky supermarkets in the Bay Area in San Francisco and Santa Clara scheduled to begin this Saturday, August 3, was canceled at the last minute after Save Mart Corporation agreed to sign off on a contract settlement that meets improvements for store workers negotiated by the UFCW, United Food and Commercial Workers Union, Local 5 and 648.

The new contract will give unionized workers historic wage increases, restore recession-era concessions and protect health care benefits, according to a statement from the UFCW Local 5 union.

According to the union, the deal was suddenly pulled off the table earlier this week by supermarket representatives, causing protests by union members and supporters in front of Lucky stores in Oakland and Pinole, forcing business to shut down.

With larger actions planned for Santa Clara and San Francisco and an International Union sanctioned strike about to begin, the company’s CEO contacted Local 5 president John Nunes and agreed to personally sign the agreement on Saturday in return for an end to the actions, the UFCW Local 5 said in a message in its website.

“This victory belongs to our members,” said Nunes. “They stood up for their rights, came together at rallies and let their managers know that they were serious about striking on Saturday night. Their solidarity and resolve has helped secure one of the best UFCW retail food settlements in recent memory.”

Details about the settlement and the ratification process will be released in the coming days. All protest actions have been cancelled, the UFCW Local 5 reported.

Meanwhile, tensions in contract negotiations between representatives of more than 500 Ralphs, Vons, Albertsons and Pavilions supermarkets and seven local unions of the UFCW, increase in southern California.

At the end of the last round of negotiations on August 1, John Grant, president of the UFCW Local 770, said in a statement sent to 46,000 members of seven unions, that “negotiations wrapped up this week with management giving proposals on wages, pension, and health care, but the truth is, their proposals are unreasonable and insulting.”

Grant said the UFCW will continue to negotiate for a contract that ensures that all current and future jobs at Ralphs, Albertsons, Vons, Pavilions, and Safeway are good jobs and warned that they will not settle for anything less than what the store workers deserve.