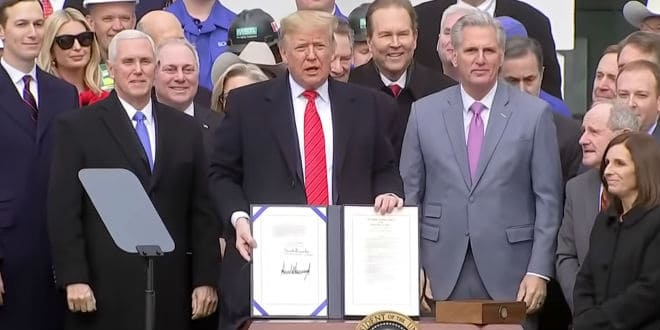 Trade associations in the United States and the Mexican government celebrated the signing by President Donald Trump of the new trade agreement between the United States, Mexico, and Canada (USMCA), which took place on Wednesday, January 29, on the South Lawn of the White House.

The new treaty is expected to take effect in June-July after Canada ratifies it in February.

The Mexican Foreign Minister Marcelo Ebrard, the Secretary of Economy, Graciela Márquez Colín, and the Undersecretary for North America, Jesús Seade, were present at the signing ceremony of the new trade agreement.

“The stage of uncertainty for our economy is ending. Once the Canadian parliament approves it, it will start a new stage for the three countries,” said Mexican Foreign Minister.

During the protocol ceremony, President Trump said: “Today, we are finally ending the NAFTA nightmare and signing into law the brand new U.S.-Mexico-Canada Agreement. The USMCA is the largest, fairest, most balanced and modern trade agreement ever achieved. There’s never been anything like it.”

The US Secretary of Agriculture, Sonny Perdue, said in a press release that the new agreement would benefit American agriculture. “USMCA is critical for America’s farmers and ranchers, who will now have even more market access to our neighbors to the north and the south. I am excited to see the economic benefits of this agreement increase the prosperity of all Americans, especially those living in rural America,” said Secretary Perdue.

Related Article: What the USMCA Means For the Food Industry?

The National Grocers Association, one of the most important associations representing independent supermarkets in the U.S., said the USMCA encourages free trade and guarantees access to products produced and grown in Canada and Mexico that would not otherwise be available in the U.S.

“NGA applauds Congress and President Trump for coming together on this vital agreement that allows independent retailers and wholesalers to serve their customers with high-quality products at competitive prices while spurring economic growth in their local communities,” said Molly Pffaffenroth, Director of Government Relations of the NGA.

For its part, the National Retail Federation (NRF) welcomed the signing by President Trump of legislation to implement the United States-Mexico-Canada Agreement.

“We believe this agreement will bring continued decades of economic prosperity that will benefit American consumers and the millions of U.S. workers whose jobs depend on the free flow of trade with our nation’s two closest trading partners,” NRF President and CEO Matthew Shay said.

Leaders of major agricultural associations in the U.S. also expressed their satisfaction with the signing of the agreement.

The Produce Marketing Association (PMA) has been firm in supporting the passage of the USMCA and appreciates the NAFTA update that has significantly helped the effort to increase the availability of fresh fruits and vegetables throughout the year, increasing consumption. In 2018, fruits and vegetables represented $4.2 billion of U.S. exports to Canada and Mexico and vegetables, fruits and nuts totaled about $12 billion in imports from Mexico to the United States in the same year.

“One of the immediate benefits to the produce and floral industries will be greater predictability of trade. With predictability comes confidence which in turn encourages investment in infrastructure and production to support the North American market. The agreement maintains zero tariffs for the trading of fruits and vegetables, modernizes labor provisions and intellectual property rights, and is consistent with PMA’s overarching goals for free and fair trade,” said Richard Owen, Vice President, Global Membership & Engagement.

Another ally of the agreement is the United Fresh Produce Association. Its president and CEO, Tom Stenzel, said: “This agreement is most important as we continue to meet the demands from consumers for increased availability of healthy fresh fruits and vegetables. Finally, we believe this new trade agreement will strengthen our partnership between the three countries and provide essential cooperation in the fresh fruit and vegetable industry.”

For its part, the National Farmers Union has been active in its criticisms of NAFTA in the past and although initially, they did not support the USMCA, after some reforms approved by Congress, the NFU decided to support the agreement.

“Though USMCA is a big step forward, it should be a floor for future trade deals, not a ceiling; when negotiating with other trading partners, we encourage the Trump administration and Congress to build on this momentum to establish fair trade agreements that protect rural jobs, ensure fair prices for farmers, and restore sovereignty to the United States,” said NFU president, Roger Johnson.