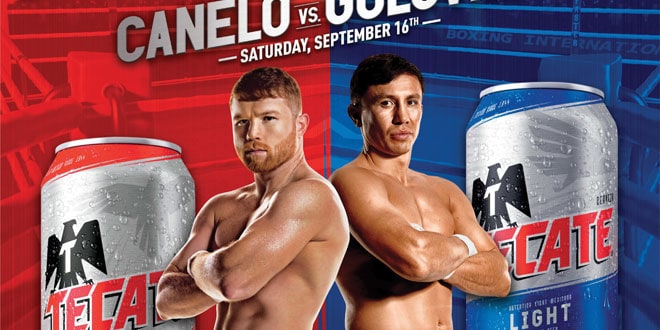 Boxing fans prepare to enjoy one of the most awaited boxing matches of our time for which Tecate will be the official sponsor of, as is tradition.

The standoff is between Saul “El Canelo” Alvarez, who holds the worldwide title, and Gennady “GGG” Golovkin.

The world-class event is set for the date of the Independence of Mexico, September 16.

Under the campaign, “Claim your Corner,” Tecate will carry out a retail sail promotion that will take place eight weeks before the fight.

According to the campaign, the promotion covers all the emotion of the standoff, since it includes boxing fans and consumers of the beer all over the world.

Through impactful point-of-view (POS) sales, consumers will be encouraged to send text messages to receive a link that will give them the opportunity to instantly win Tecate® prizes, as well as enter a drawing to win tickets to attend this grand sporting event.

The promotion is designed to create consideration and commitment among main Tecate consumers, Hispanics. A third of boxing fans are Latinos and watch boxing twice as much as the average consumer, according to Nielson.

Hispanics buy pay-per-view fights four times more than the rest of the population.

“Tecate continues to support the larger tradition of boxing, the most emotional and high profile fights between the most renowned boxers in the world,” said Gustavo Guerra, Tecate’s Director of Marketing. “The association of the brand with the sport has had a tremendous impact on consumer commitment and Tecate’s sales.”

The promotion of “Claim Your Corner,” which will be held between July 1 and August 31 at all national outlets, will not only benefit Tecate® consumers and boxing fans, but also distributors and shopkeepers.

Retailers can line up with the winners, even before the beginning bell.

Mexican imports boosted by 93 percent the growth of the beer and Tecate import segment, delivering the highest percentage elevation when it comes to promotion of the Domestic Premium segment.

Tecate’s principal objective, which are Hispanic buyers, make 6 percent more trips to the stores compared to the average beer buyer.

“The combination of high and low traffic of stores, increased buyer interest made by the impacting POS material, exhibitions and prizes, make a unique retail sale and more profit opportunity,” added Guerra.

“Claim Your Corner” is a completely integrated marketing program that functions on multiple levels to increase the participation of consumers and retail sales.

Related: The Mexican Beer Strengthens its Sponsorship at Sporting Events

The publicity directed towards consumers with a specific focus on a video with Sylvester Stallone will boost awareness, expand reach and maximize impact, the press indicated.

Likewise, the digital and social mediums with Tecate publications over “Golden Boy,” Canelo and the Chicas, will share exclusive content to increase emotion and anticipation.