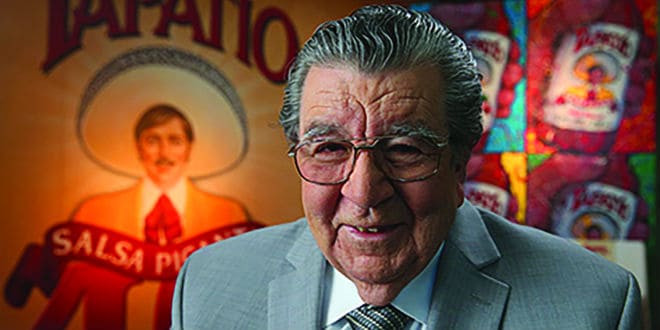 With a 45-year-old tradition, Tapatio has become a brand logo on the market of the hot sauces in the world, thanks to its quality and recognition of consumers who enjoy mild itching and its great taste.

This family business was created at the beginning of the 1970s by don José-Luis Saavedra, who then worked in the aerospace industry, and his wife, who began to develop a recipe of spicy sauces that they shared with friends and coworkers.

When the plant where he worked was forced to close its doors in 1971, he decided to open a small plant of production of the sauce, after receiving encouragement from his wife and friends.

“After some time, the sauce is developed in a product accepted by the community and them sales began to grow by which the challenge was accelerated by the production to meet them growing demands of the market”, said Saavedra.

The company had its beginnings in a Hispanic area in the city of Maywood, Calif., and the distribution of the product was on the East side of Los Angeles, in their majority to mini markets and perhaps one or two supermarkets.

According to the entrepreneur, there were many factors that contributed to the company’s success and the acceptance of the product.

He said that in the initial stages no there budget marketing available, so people were aware of the quality of the product the voice to voice.

“We have always thought that once someone Tapatio you will discover the soft spicy and wonderful taste that keeps them coming back for more,” said don Luis to highlight also the presentation of the product, which has been critical to the success of the brand.

“The man on the label is the figure very attractive of a cowboy Mexican.” He’s a Tapatio, a person born in the State of Jalisco,”explained to indicate that this image has broken stereotypes that have prevailed in the United STATES for many years.

“In fact, there is a bottle of Tapatio in the Smithsonian Institute in Washington, DC, on an exhibition of how an immigrant has changed the image of a culture through a commercial product,”

Tapatio today has a plant of production and storage of 50,000 square feet in the city of Vernon, California, which is equipped with fully automated production lines.

But iconic sauce flavor has led them to other levels. In 2011 Tapatio reached an agreement with Frito-Lay Co. to develop chips flavored Tapatio. Similarly, earlier this year was released protein product line with Tapatio taste.

These products were introduced for the first time in military bases around the world and are now beginning to appear in local markets, as well as the Wal-Mart across the country.

Currently, the spicy Tapatio sauce is exported to Mexico, America Central, Emirates Arab United, America of the South, New Zealand, Australia, Africa of the South, Philippines, and Europe. They are in talks to open distribution in China and Southeast Asia.