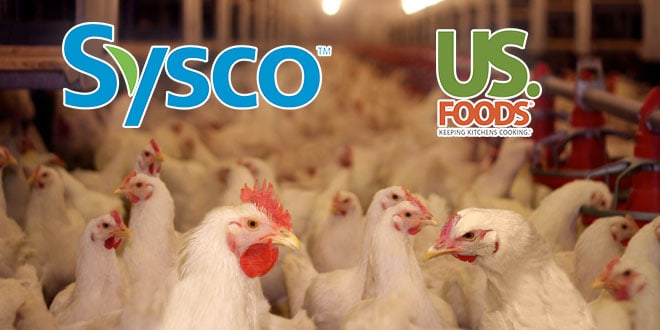 The nation’s largest poultry producers are facing two separate federal lawsuits from Sysco and US Foods, accusing them of driving up chicken prices.

The two giant foodservice distributors that buy chicken and other food products that they sell to grocery stores, restaurants and other consumers accused 17 different poultry companies, including Tyson, Pilgrim’s Pride, Koch Foods and Perdue, of working together to both restrict the supply of chickens being raised and also to manipulate an index of chicken prices used by the industry.

The 131-page complaints were filed in a federal court in Illinois on January 30th. The lawsuits alleged that the chicken companies curbed chicken supplies by coordinating their flocks of breeding birds, with each company keeping tabs on its rivals’ activity via an industry information service called Agri Stats Inc.

The Georgia Dept. of Agriculture indefinitely suspended the Georgia Dock in 2016 and launched a new index in 2017.

The suits allege the conspiracy went on from 2008 through at least late 2016.

Springdale, Arkansas-based Tyson Foods denied any wrongdoing. “Follow-on complaints like these are common in antitrust litigation,” Tyson said in a statement. “Such complaints do not change our position that the claims are unfounded. We will continue to vigorously defend our company.”

Also, in a statement, Pilgrim said that the company “believes the case is completely without merit. We look forward to defending our interests through the appropriate legal process.”

Chicken producers have faced similar suits in the past, but the latest complaints are by a pair of distributors that together account for about a quarter of U.S. food distribution, generating about $78 billion in annual revenue, reported the Denver Business Journal. The companies supply restaurants, hotels, hospitals and other large facilities.