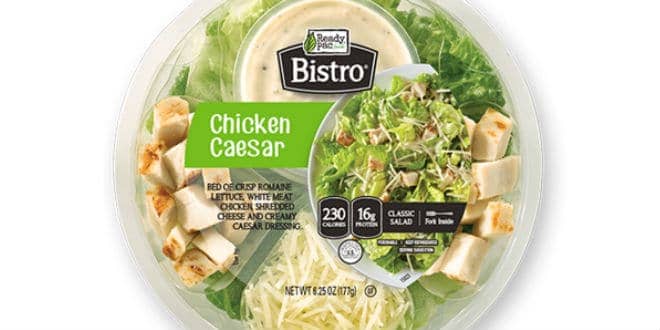 More than 97,000 pounds of salad, from the Missa Bay company, are being recalled in 22 states around the country due to an outbreak of E. coli 0157: H7. So far, the infection has made 17 people sick, the Food Inspection and Safety Service (FSIS) of the US Department of Agriculture, and the Centers for Disease Control and Prevention (CDC) reported.

Health officials confirmed the presence of E. coli bacteria in lettuce ingredients from the salads that also has meat and chicken.

According to the FSIS, the salads were produced between October 14 and 16, 2019, and distributed to different grocery stores under different brands, including Aldi, Bistro, Bonduelle, Domino’s, Marketside and Signature.

The full list of salads recalled can be found by clicking here.

The CDC began the investigation into the multi-state outbreak of E. coli after receiving information from the health departments of Maryland and Wisconsin about people became ill and hospitalized due to infection with the bacteria.

As of Thursday, November 21, the CDC had reported 17 people sick with E. coli infection in eight states, and seven hospitalized after eating salads.

The Maryland Department of Health identified E. coli O157 in an unopened package of Ready Pac Foods Bistro Chicken Caesar Salad, collected from the home of a sick person in Maryland. The salad had a “Best By” date of October 31, 2019, according to the CDC.

In a statement, ALDI supermarkets informed Abasto that the salads they sell and that are included in the recall, have already been removed from the shelves of their stores.

“We take the safety and integrity of the products we sell very seriously. The two products ALDI sold that were included in this recall, Little Salad Bar Chicken Caesar Salad, and Little Salad Bar Santa Fe Style Salad, had been removed from our shelves already and they are past their use-by dates. All of the products currently on our shelves are safe to eat. If customers still have the products mentioned in the recall with a use-by date prior to November 2, 2019, they should not consume them and should discard them immediately or return them to their local store for a full refund,” said the statement.

Advice About the Salad Recall

Salads distributed by the New Jersey-based Missa Bay company were sold in many states and to many retailers.

If you have this salad at home, do not eat it and throw it away.

Most people with a STEC infection start feeling sick 3 to 4 days after eating or drinking something that contains the bacteria. However, illnesses can start anywhere from 1 to 10 days after exposure.

Some people may have a fever, which usually is not very high (less than 101˚F/38.5˚C). Most people get better within 5 to 7 days. Some infections are very mild, but others are severe or even life-threatening.

Some people with E. coli infections may have a type of kidney failure called hemolytic uremic syndrome (HUS).

Write down what you ate in the week before you started to get sick and your illness to your local health department.

Help public health investigators by answering questions about your illness.