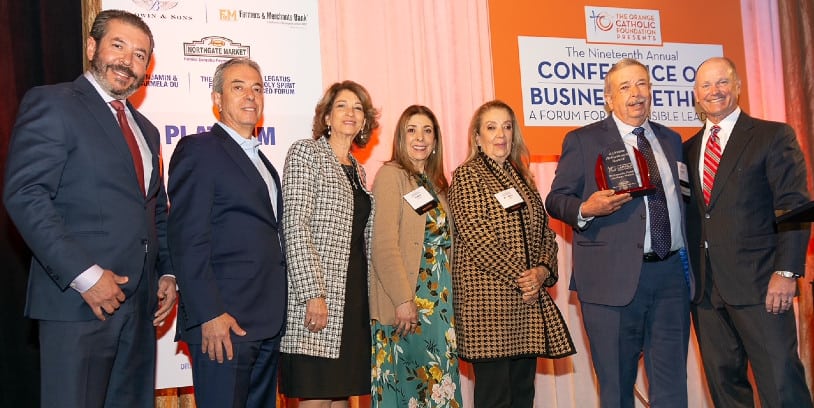 The Orange Catholic Foundation recently recognized the Gonzalez family, owners of Northgate Market, for their significant contributions to the Orange County community during the Foundation’s 19th Annual Conference on Business & Ethics.

The Conference on Business & Ethics is a much-anticipated annual event that brings a rare focus onto ethical business practices in Orange County and the world at large by recognizing business leaders who have made an honorable difference in their spheres of influence.

The Gonzalez family was given the Farmers & Merchants Bank Lifetime Achievement Award at this year’s event, which raised more than $450,000 in tuition assistance for students in greatest need in Catholic elementary schools throughout Orange County.

The Orange Catholic Foundation is a 501 (c)(3) charitable corporation that serves the Catholic community of Orange County.

“We are humbled by this recognition by the Orange Catholic Foundation,” said Miguel Gonzalez, co-president of Northgate Market. “Faith has always been a core value for our family and company. Our faith in God has taken us through some of the hardest times as a business. Grounded in our faith, we are compelled to want to give back to the community in scholarships, food, health initiatives, and so much more.”

About the Gonzalez Family

After the burning down of the family’s shoemaking business in Mexico, Don Miguel and Doña Teresa Gonzalez realized that they had to make a significant change in their family life to create a new future for their 13 children.

In 1980, Don Miguel and Miguel Jr. had the idea of buying a small grocery store where the family could work together and generate a better life. After they mortgaged their homes, Northgate Market was born in downtown Anaheim.

The entire family poured their hearts and souls into the new business, where their faith and devotion to God helped them through the tough times.