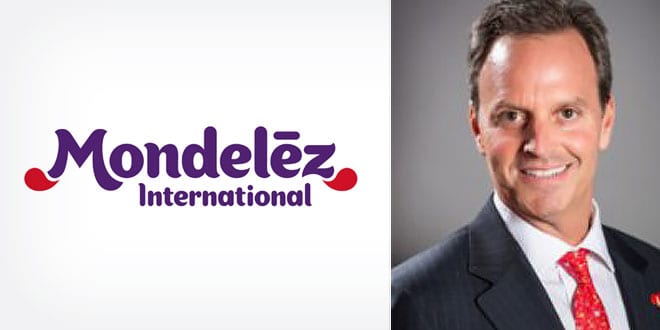 Mondelez International announced that Glen Walter, 49, will join the company on November and become Executive Vice President and President, North America.  In this role, he will be responsible for leading the company’s $7 billion business in the United States and Canada, which includes Power Brands such as Oreo and belVita biscuits; Triscuit and Good Thins crackers, Trident gum and Halls cough drops.

“Glen is an inspirational leader with an impressive track record of building brands and driving growth in North America and beyond,” said Chairman and CEO Irene Rosenfeld.  “His deep operating experience in complex businesses, including a strong focus on sales excellence, make him a terrific leader for our North America region. I’m delighted to welcome Glen to the Mondelez International family.”

Walter joins Mondelez International from the Coca-Cola Company, where he has held a variety of leadership positions over the past decade.  Since 2014, Walter has served as CEO of Coca-Cola Industries China, where he led his team to accelerate revenue growth, improve productivity and expand routes to market.  Before this, Walter was President and Chief Operating Officer for Coca-Cola in North America, with 70,000 employees and annual revenues of $22 billion.  During that time, he was a key contributor to the delivery of multiple consecutive quarters of market share growth and operating income expansion.

Prior to his time at Coca-Cola, Walter served as President of InBevUSA in addition to various general management and M&A roles within InBev and Interbrew, including leading the integration of Bass Ale and Beck’s.  Earlier, Walter served as General Manager at Pearce Beverage Company and started his career in sales and marketing at EJ Gallo Winery, Inc.

“I’m thrilled to join Mondelez International and begin working with the leadership team to grow the North American business on both the top and bottom lines,” Walter said.  “I look forward to collaborating with my new colleagues to shape the future for our unparalleled portfolio of iconic brands.”

Walter is an active member of his community and serves on the Board of Governors for the Boys and Girls Clubs of America.  He earned a bachelor’s degree in international business and economics from Boston University.  In addition, he attended the Executive Leadership Program at INSEAD and Wharton.

Walter succeeds Tim Cofer, who stepped into the North American leadership role on an interim basis in April.  Cofer will now return full time to his responsibilities as Chief Growth Officer.

Valerie Oswalt, currently President, NA Sales, has been appointed to the role of President, NA Confectionery at Mondelez International.

As Val takes on her new position, she will be transitioning her current Sales leadership responsibilities to Matthew Eckard, currently West Area Vice President, US Sales, who has been appointed to the role of President, NA Sales for Mondelez International, effective January 1, 2018.

Since joining the company in 1996 as a Sales Finance Analyst, Oswalt has progressed through a broad range of cross-functional roles including Vice President, West Area Sales. Prior to that, she was Customer VP for Business Development, playing a key leadership role in establishing two distinct, world-class Customer Teams and Retail Sales organizations to support the spin-off of Kraft Foods Group in 2012.

Among her many career highlights, Oswalt held the role of Walmart Customer VP of Beverage and Grocery, during which she and her team delivered unprecedented successive revenue and share growth for the business and were named Walmart’s “Supplier of the Year.”