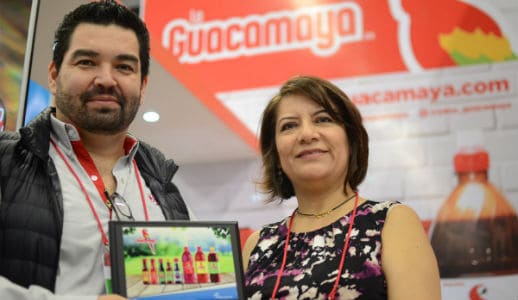 Abasto presented a plaque of recognition to La Guacamaya during the Expo ANTAD and Alimentaria 2016.
La Guacamaya is one of the associated brands of Abasto Media that was there to receive this plaque in gratitude for their contribution to the Hispanic Food and Beverage Industry.

The history of the famous sauce from La Guacamaya, goes back to the year 1948, in the city of El Rosario, Sinaloa. (Mexico) where the marriage of Don Pablo Gandarilla and Doña Severa del Rincón Bernal initiated a domestic and craft business.
The sauce was originally made using rudimentary tools and techniques. Using a manual mill for corn and a stone metate to grind pepper and spices that were used for the sauce.

Basically, the sauce was prepared with ground chilies, spices and seasonings. Small quantities were obtained with these methods, allowed their sauce to be popular in the village, and in the Southern part of the State. The popularity of the sauce forced the company to expand volumes of production and therefore the techniques used to make the sauce as well.

In 1962 the sauce was introduced to the city of Culiacan, capital of Sinaloa State, thanks to the partnership with entrepreneurs in this city. It is because of this that the small family business became an institutional company. In 1987 the construction began of its industrial building in Culiacan, which would increase production and ensure supply. By this time, the Guacamaya sauce had already been consolidated as part of the Sinaloense taste, and began to penetrate into the States of Sonora and Baja California.

Currently, La Guacamaya industries is a company with more than 200 employees, in various States of the Mexican Republic and points of distribution in the United States.
Equipped with technology and modern production equipment, and keeping the commitment and quality of the original product, La Guacamaya industries currently produces a variety of sauces, spices and products which, for almost seven decades, has “given the point” dishes of Mexican food.
The company and collaborators are governed by values and principles aimed to always give the best in their work.

This set of values shapes their honor code:

“Our actions are worthy of the pride of being part of the La Guacamaya. We are a family.
We express ourselves and listen without fear. There is always the possibility of improving.
We are always committed, willing and do what is necessary to make things happen.
We act with good intentions and always support the team.
We love what we do, we work with passion.
We always meet our activities timely and correct way.
We measure, evaluate and Act, always with a goal clear.
We make good use of time and resources provided.”