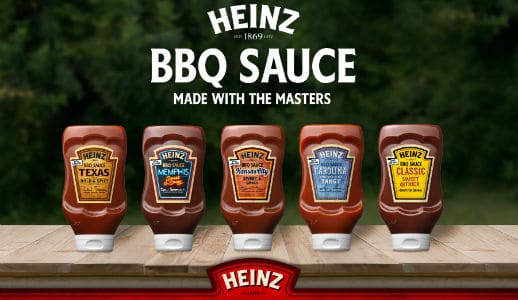 Heinz is starting to promote its five new barbecue sauces, making a push to stand out in a category that has been heating up with entries from smaller food makers.

Heinz is a dominant condiment company because of its ketchup. But when it comes to barbecue sauce, the brand had been sitting out. Much like last year, when it began a broader sales push for yellow mustard, it is trying to shake up the barbecue sauce segment with its new line.

Heinz started selling a “Classic Sweet & Thick” flavor and four others based on regional tastes earlier this year. The Kraft Heinz Company already had Kraft branded barbecue sauces, but the company said there’s a place for each brand in the category, calling them “really differentiated” lines.

Kraft Heinz (NASDAQ: KHC) found five pitmasters to help promote its four different regional tastes: Joe and Mike Pearce in Kansas City, Dan Brown in Memphis, Tenn., Robert Sierra in Texas and Sam Jones in Ayden, North Carolina. They were already selling their own sauces, rubs and spices in their restaurants. Now, their signatures and stories appear on the Heinz bottles. They also star in the marketing push, which kicked off Thursday night with a “Jimmy Kimmel Live” segment. A 30-second spot made its debut right after the in-show segment. The commercial shows the guys knowing a lot about barbecue, but not much about how to be spokesmen.