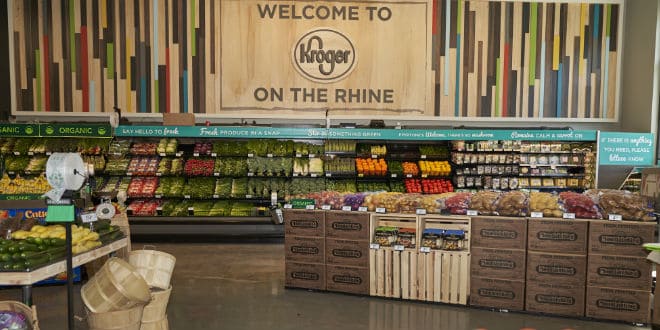 The new two-level Kroger urban format store features grab-and-go and ready-to-heat meals for lunch and dinner, in addition to fresh fruits and vegetables and a traditional grocery shopping experience.

Located in the city’s central business district and accessible to downtown workers and residents as well as customers from the historic Over-the-Rhine and West End neighborhoods, the urban format store anchors an 18-story residential high-rise and is located a block away from Kroger’s national headquarters.

On The Rhine Eatery can accommodate up to 200 customers and offers indoor and outdoor seating as well as a full-service bar, offering signature cocktails, local beers, tasteful wines and Kentucky bourbons. Featured restaurants and dishes at the food hall include:

“On The Rhine Eatery features emerging restaurants and true tastes of Cincinnati – all handpicked by Kroger’s culinary team to create a popular hangout for meals, cocktails and community,” said Teri Rose, Kroger’s senior director of culinary development. “Cincinnati is Kroger’s hub for culinary innovation and experimentation, and the food hall is an example of the types of concepts and ideas we’re creating every day.”

Cincinnati was named one of the top 50 best places to live by U.S. News and World Report in 2018 and cited by The New York Times as one of “52 Places to Go in 2018.”  National food and travel magazine SAVEUR recently selected Cincinnati as the host city for its 2019 social awards, a three-day event that will bring influencers together from around the country and beyond to explore the city’s food scene.