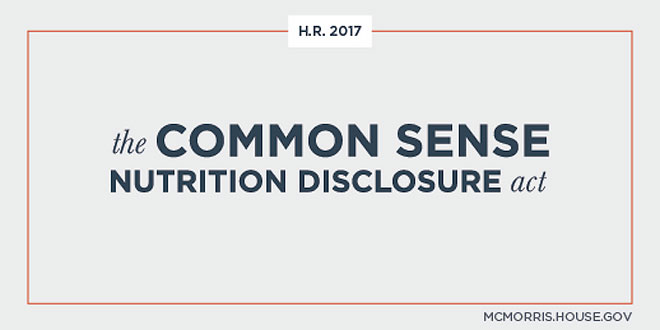 The menu labeling topic has been the subject of controversy on many lips the past couple of months and is about to be solved, thanks to the approval in the U.S. House of Representatives for the Common Sense Nutrition Disclosure Act (H.R. 772), which had a bipartisan vote of 266 to 157.

The bill, introduced by Representatives Cathy McMorris Rodgers (R-WA) and Tony Cardenas (D-CA), would clarify the Food and Drug Administration’s (FDA) final rule on menu labeling to create flexibility for grocers to comply.

There were many who were quite happy with the bill, such as the National Grocer’s Association (NGA), who applauded the Common Sense Nutrition Disclosure Act.

“This bill provides a common sense solution to a burdensome regulation that was applied as a one-size-fits-all approach to vastly different industries,” said Peter Larkin, president and CEO of the NGA. “Independent supermarket operators are committed to providing their customers with accurate nutritional information, but need the flexibility to implement the rule across a multitude of store formats, all of which operate much differently than a chain restaurant.”

Lyle Beckwith, senior vice president of government relations at NACS, also had something to say about the new regulation bill.

“In passing the Common Sense Nutrition Disclosure Act (CSNDA) today, the U.S. House of Representatives has reached a critical milestone toward the shared goals of providing consumers the information they need to make wise nutritional choices – without burdening them with higher prices and reduced choices, or exposing small businesses and their employees with to insurmountable barriers to compliance, crippling costs and potential criminal penalties for innocent mistakes,” Beckwith said, according to NACS.

The FDA finalized menu labeling regulations as part of the Affordable Care Act in November 2014. The regulations required that chain restaurants, similar retail food establishments and vending machines with 20 or more locations list calorie information on their menu’s and menu boards. The regulation will go into effect on May 7, 2018.

Now, the H.R. 772 bill will be voted upon in the Senate and if approved, will be sent to President Donald Trump to become law, which would put an end to the controversial regulations that the FDA plans to enforce next May.