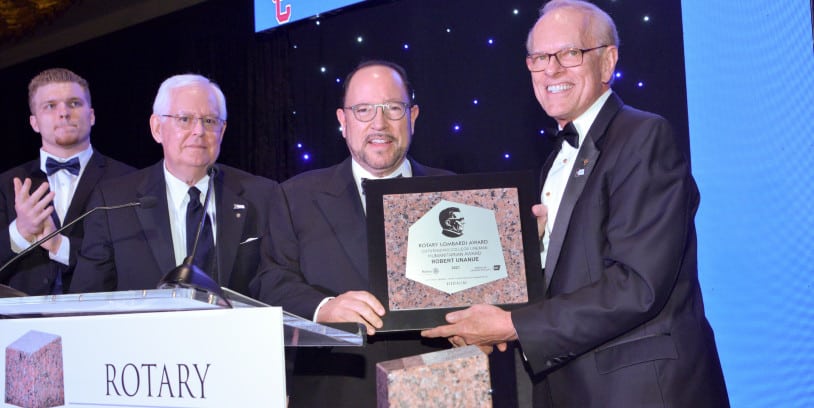 The Rotary Club of Houston awarded Goya Foods, the largest Hispanic-owned food company in the United States, the Rotary Lombardi Humanitarian Award for its humanitarian efforts and continued support to its communities.

Last given ten years ago, this prestigious national award was presented to President and CEO of Goya, Bob Unanue, at the 48th Rotary Lombardi Award. This annual event recognizes the nation’s best college football linemen and celebrates the memory of one of football’s greatest coaches.

“Goya Foods is a great humanitarian company with kind and compassionate people – recognized not only for their generous giving but for encouraging others to serve their communities. In addition to supporting significant issues such as human trafficking and cancer research, Goya donated over 4.5 million pounds of food nationally and in Houston during the pandemic so that families in need, our healthcare workers and front-line heroes were nurtured, fed and felt appreciated,” said David Schwarz, 2021 General Chairman of the Rotary Lombardi Award.

In response to the recent tornadoes in the South, Goya is donating over 50,000 pounds of food to victims in Kentucky with the help of local non-profit organizations.

“It is a great honor to receive the Rotary Lombardi Humanitarian Award on behalf of Goya Foods and all of our employees who have worked tirelessly during the pandemic so that we could donate much-needed food during these difficult times.  I am so proud of our Great Goya Family and to accept this award in honor of their commitment and dedication to the success of Goya and the communities we serve,” said Bob Unanue, President and CEO of Goya Foods.

Since 1970, the Rotary Lombardi Award has been presented annually to recognize the nation’s top college football lineman who, in addition to outstanding performance and ability, best exemplifies the discipline of Vince Lombardi and the humanitarian work of individuals.

Just weeks after Coach Vince Lombardi’s death in 1970 from colon cancer, the Rotary Club of Houston was authorized by Vince Lombardi’s widow, Marie, to establish the Rotary Lombardi Award. As stipulated by Mrs. Lombardi, net proceeds from the Award activities are contributed to cancer research to fight the disease that claimed the life of Coach Lombardi.

Since the award’s inception in 1970, millions of dollars have been raised to help the American Cancer Society’s cancer research programs and public education to cancer patients.