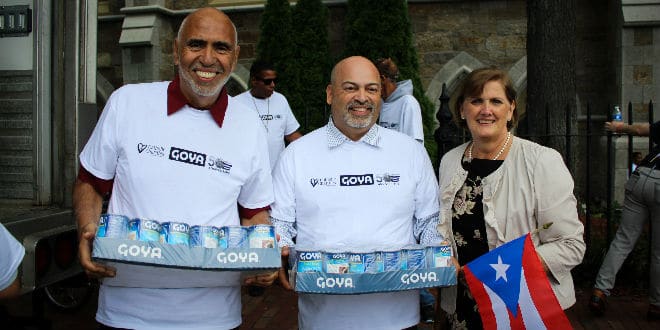 A young Hispanic girl with a serious heart condition dreamed of having a big Quinceañera, so the Make-A-Wish organization sought out Goya Foods to help fulfill the girl’s dreams, who depends on a pacemaker to live. The company not only responded with a donation of funds, but also helped her get a new dress for the party, made the invitations and a group of employees collaborated with the room decorations where they celebrated the Quinceañera.

With a small gesture, like fulfilling the dream of a seriously ill girl, or donating millions of tons of food to victims of natural tragedies, Goya Foods reflects its social responsibility and commitment to its community, which are the Hispanic food company’s fundamental values.

For 82 years, Goya Foods has not only been one of the main food providers for Latinos in the US, but one of its greatest benefactors. According to the TotalSocial classifications of the Engagement Labs data and analysis firm, in 2018, it ranked second among the leading companies of social influence among the largest food brands in the US.

The Unanue family, owner of Goya Foods, has always been aware of the importance of helping the Hispanic community and local organizations that offer social services to people in need.

Abasto magazine interviewed Rafael Toro about the outstanding social work by Goya, who has been the public relations director of the company for 33 years and is also the person in charge of overseeing all activities related to helping the community.

In 2011 at the celebration of its 75th anniversary, in 2011, the company established its national initiative Goya Gives to reaffirm its commitment to promote and support the general welfare of communities through social responsibility, environmental initiatives and corporate values. Today, the company supports nearly 300 charities, programs and scholarships.

Toro said that in the last year, “in terms of donations we delivered more than two million pounds of food to the victims of the hurricanes in Puerto Rico, Texas and Florida. We also donated more than 1.5 million pounds of food to Feeding America, who run food banks throughout the US and we have programs with Catholic Charities in New York, New Jersey and other parts of the country.”

As the Christmas season approaches, Goya Foods also seeks to collaborate with charities. “We always work with organizations like the Salvation Army to donate toys, we also work with orphanages outside the country, in the Dominican Republic, in Mexico and in Colombia, where we give gifts to the kids. That’s the best part of my job, when I deal with those children,” said Toro, who says that thanks to the great heart of the Unanue family, he has the best job.