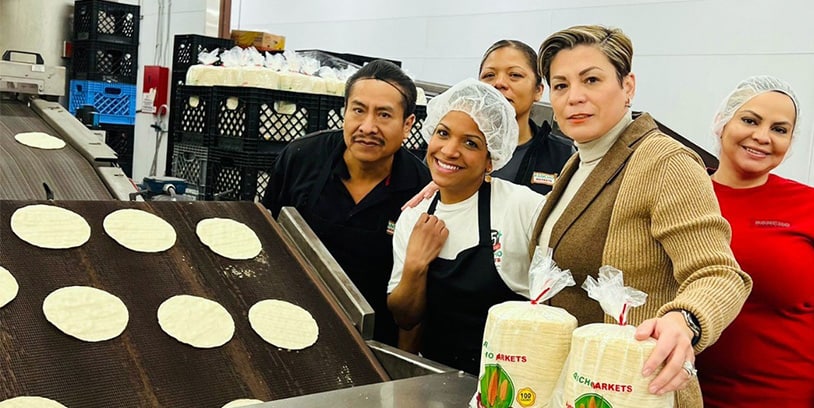 Collecting grocery carts from the parking lot of a small grocery store in Ontario, California called Little House Warehouse, Eli Madrigal began, at age 16, learning what to do in a supermarket.

In two and a half years, she worked selling hot dogs at the entrance of the store, bagging customers’ purchases, being a cashier, a cashier supervisor, and stocking merchandise on the shelves.

“That’s where my infatuation with supermarkets began, the adrenaline rush that supermarkets cause,” says Madrigal in an interview with Abasto Magazine.

With amazing determination and practically from scratch, this Mexican native of Mexicali, Baja California, worked tirelessly to build a chain of nine Hispanic supermarkets in Salt Lake City, Utah, in just over a decade.

That motivation, that perseverance, the tireless work to achieve her goals since she was a teenager were born, according to Eli Madrigal, “from the hunger to have.” And she has never lacked the wit to get what she wants.

She remembers that when she was a child, her father didn’t even have money to buy her ice cream at the store, so she would collect empty beer bottles, and on Sundays when the ice cream vendor passed by, she would exchange the bottles for ice cream. “That was my first barter as a child,” Madrigal says of her entrepreneurial spirit.

Upon finishing high school, Madrigal says she returned to live on the border, near her family. She was living in Mexicali and working in Calexico when she fell in love at age 19, got married, and at age 20 she had her son Christian. In search of a better future with her new family, she moved to Las Vegas, but soon after she got divorced, leaving her alone with her son.

Since the only thing she had experience with was supermarkets, Eli Madrigal looked for a job in a grocery store where her luck began to smile on her.

“I start working as a cashier in this supermarket and after about two or three months of being there, the person who made the grocery orders resigned. So the store owner brought us together and asked if any of us knew how to use the machine to make orders, so I raised my hand and said I knew how to use it.”

From being a cashier, Ella Madrigal rose to become the assistant in the Grocery Department making orders. By the end of that first year on the job, in 1995, she was already running the supermarket where for the next ten years she learned everything she needed to efficiently run a grocery store.

The ambition to have something of her own and keep growing eventually pushed Eli Madrigal to take a leap of faith. She planned on moving to Arizona or Texas to open her own supermarket, but a friend of hers advised her to go to Salt Lake City, where there was a growing Hispanic population and few supermarkets serving this community.

Madrigal recognized the potential of opening a Hispanic business in that city, so in 2006, with the support of two acquaintances who lent her $170,000 and served as co-signers to rent the premises, she opened her first Rancho Markets supermarket in a space of 4,300 square feet.

“From the first day, I named it Rancho Markets because for me the happiest days I remember were when they told me to go to the ranch with Grandpa Luis. I opened on June 20, 2006, it took me six months to make my dream come true”, says Madrigal.

The first weekend she opened Rancho Markets she made an $8,000 profit with which Madrigal was able to pay the $6,000 payroll. The now businesswoman understood that if she wanted to make some money she was going to have to open another supermarket because for her the “hunger to have” was still very strong.

Eli Madrigal’s goal was to have a successful supermarket chain, and with the assistance of a local organization, she prepared her financial study to seek a bank loan.

“Being a woman, an immigrant, and an entrepreneur, they gave me a small business loan,” said the Hispanic businesswoman, so after a few months she was able to open her second store, this time 8,000 square feet, dedicating a good part of the space to the area of fruits and vegetables.

By December 2007 Madrigal was operating three Rancho Markets supermarkets in Salt Lake City, and in 2009 two more stores were added. Until that moment, Madrigal dedicated all her time, seven days a week, up to 16 hours a day, to work. When she married Roberto Paredes in 2010, she found her ideal partner who supported her business growth plans.

«We managed to have 11 supermarkets but we closed two because the premises were rented and were not as productive. What we did was build larger supermarkets, with their own tortilla plant », explains Madrigal.

Her entrepreneurial spirit was not limited to her supermarket chain. Due to the difficulty it had in finding an ice cream supplier, in 2019 Madrigal decided to produce its own ice cream to supply its stores. Business was so good that in 2020 they built a facility to house the Rancho Markets’ La Michoacana ice cream factory.

In just 15 years Eli Madrigal achieved her dream of having a chain of nine supermarkets and an ice cream factory, all while employing 500 people.