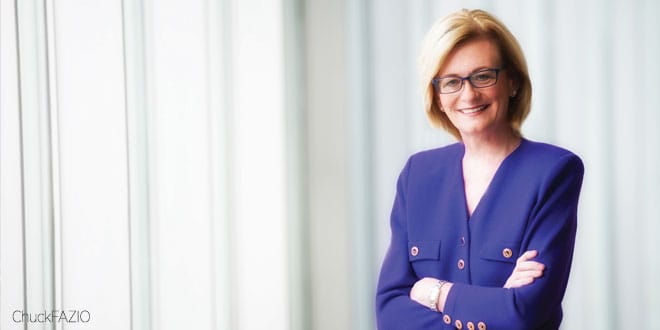 Amid preparations for the National Restaurant Association (NRA) trade show, held May 19 to 22 in Chicago, Dawn Sweeney, President of the Association, has two other celebrations in mind: the first centenary of the powerful organization and ten years that she has been leading the NRA.

When Sweeney took the NRA’s reigns in late 2007, the George Washington University graduate specialized in business administration, turned into the first woman to assume that influential position and confessed to Abasto Magazine that she did not have major knowledge about the restaurant industry because she had never worked in it before.

To solve that lack of experience, Sweeney dedicated herself to working in restaurants doing all kinds of labor during her first year in the NRA. “I probably worked 30 different jobs in restaurants during my first year. I’d never worked so hard before or since and it helped me become more efficient in my role as leader of the National Restaurant Association because I have the knowledge that can only be achieved with working in a restaurant,” the executive said.

Abasto Magazine: It’s been 10 years since you assumed the position as President and CEO of the NRA. What have your main achievements been leading this organization?

Dawn Sweeney: “What I am most proud of and grateful for is that during my tenure we have built a solid strategy on the things we want to achieve. We have tried to make the organization grow in terms of impact and its influence from the point of view of the legal profession with the work we do in government affairs, with members of Congress, with state legislators and city councils. We have more than duplicated our income in the past 10 years, when I started we were an organization of $50 million. This year we will reach $120 million”.

AM: The NRA show is taking place in May in Chicago. What’s new in the event this year?

DS: “Preparing ourselves for our 100-year anniversary, this year we will begin to make changes on how our members that attend the show participate, there will be more digital participation, we will have a conference to help restaurants increase their profits, we anticipate numerous changes that will make the show more interactive and interesting, moving away from a traditional show to become a unique experience in 2019, when we celebrate our 100th anniversary.”

What are the new food trends affecting restaurants’ future?

AM: Four out of 10 restaurant businesses are owned by minorities and the number of Hispanic restaurants has had a considerable increase in the last decade. How important is this growth for the NRA?

DS: “We are very excited about it. The growth of Hispanic owned restaurants has been more than 50% in the last 10 years and we know that more than 50% of the leadership of chefs in our industry and more than a third of the administrators are ethnic minorities, so as an industry we are among the best in diversity and inclusion”.

AM: Do Hispanic and minority restaurants in general have enough representation in the NRA?

DS: “I would say that we have given high priority to the development of inclusion and diversity in our Board of Directors, as well as in the composition of our leadership in the personnel area. Since 2016, we brought a group called The Multicultural Food Service and Hospitality Alliance to our organization, which is dedicated to promoting diversity in our industry and its advance in leadership positions, but frankly I think we should do more. We are on a journey and we have not reached our destination yet, although we are better than we were 10 years ago.”

AM: What do you see for the restaurant industry’s future and the NRA’s?

DS: “We are a growing industry and will continue to be, with a brilliant future. In a particular way, the restaurant industry has been a part of the US identity in which we open our doors to everyone and help teach them the values and skills to follow a positive life and a career. Our industry is fundamental to the American economy and we know that we must be changing and evolving to meet the varied needs and trends of the new generation’s client groups. I believe that positive opportunities outweigh the negative challenges placing us in a very optimistic position.”