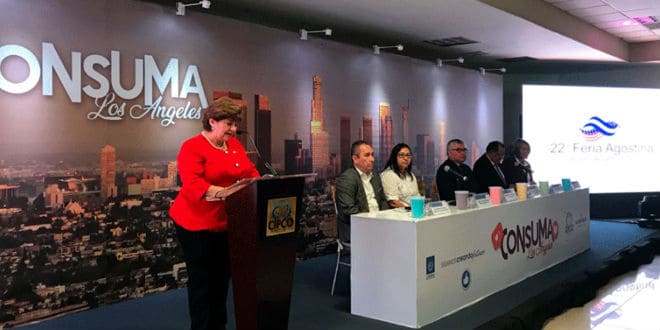 The International Fair and Convention Center of El Salvador (CIFCO) will participate once again in the twenty-second Agostina Fair in Los Angeles from August 3 to 5. This year, CIFCO, co-organizes the fair under the Consuma Los Angeles brand, which has gained international prestige and connotation as the largest trade and entertainment fair in the Central American country.

At the Agostina Fair in Los Angeles, tens of thousands of Salvadorans will enjoy entertainment and great opportunities for business, investment, promotion of services and products.

“In CIFCO more than opportunities, we materialize dreams and this is one of them. Consuma Los Angeles will be a reality next weekend,” the President of CIFCO, Marta Cecibel Lau, said.

For more than 30 years, the institution has worked hand in hand with different brands to bring trade and entertainment for the half million people attending the fair every year.

Consuma Los Angeles collects the nostalgic elements of El Salvador and combines them with the present to offer real opportunities to micro, small, medium and large companies so that they can massively market their products, thus boosting the economy in more than $45 million.

Hence the need to bring these products to more Salvadorans and the Agostina Fair of Los Angeles will be the perfect setting to bring a little Consuma outside their borders, preserving the sense of belonging and traditions celebrated during the festivities in honor of the Divine Savior of the world.

CIFCO, in cooperation with the foundation “El Rescate,” aims to increase the degree of satisfaction and expectations that the fair has in the city of Los Angeles, offering musical presentations by great artists such as Nory Flores, Marito Rivera, Melao Group, The Authentic LL Band, René Alonso and his Laser Band, among others. In addition, there will be the presence of Cocolito and the traditional “Viejos de Agosto”.

From August 3 to 5, visitors will be able to enjoy Consuma Los Angeles in the company of more than 90 exhibitors and great entertainment and gastronomy options within the framework of the Los Angeles Agostina Fair held at McArthur Park.

During the last years, CIFCO has provided full support to the Salvadoran national artist. Consuma Los Angeles 2018 will not be the exception, since it will have some of the best musical representatives of the Central American country.