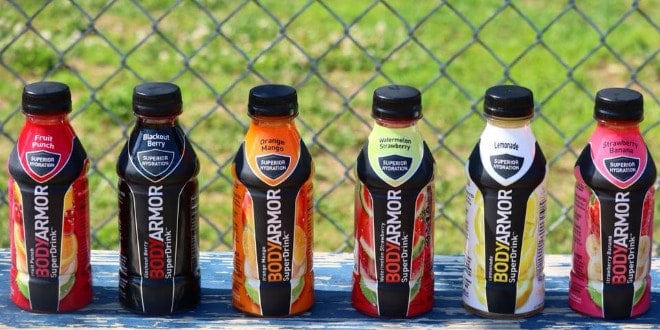 Coca Cola has said it will take a stake in sports drink maker BodyArmor, making it the company’s second largest shareholder.

BodyArmor is a line of energy drinks with no artificial colors or flavors and is made with potassium and other electrolytes, vitamins and coconut water. Although like Gatorade and Powerade, BodyArmor shares electrolytes in their beverages, it is lower in sodium and higher in potassium. It is marketed as a healthier drink in comparison with its energy drink competitors.

Although Coca Cola entered the sports drink segment with Powerade, the giant in that section is Gatorade, owned by rival company PepsiCo. With this stake in the better-for-you sports beverage line, Coca Cola is doubling their efforts to win in the competition against PepsiCo.

With the rise and popularity of healthier drinks, BodyArmor has quickly risen, using high profile athletes such as Kobe Bryant and baseball player Mike Trout. In fact, PepsiCo’s Gatorade recently launched a sugar-free drink for the first time, showing the pressure of consumers choosing healthier options. However, BodyArmor still comes in third to Gatorade and Coca Cola’s Powerade.

Financial terms of the agreement were not disclosed, but Coca Cola said that the partnership will give Body Armor access to Coca-Cola bottling facilities and future potential for global expansion.

“BODYARMOR is one of the fastest growing beverage trademarks in America and competes in exciting categories. I have no doubt it will prove to be a strong offering to our system alongside our already powerful hydration portfolio as we accelerate our position as a total beverage company,” said Coca-Cola North America President Jim Dinkins.

Co-Founder and Chairman of BodyArmor, Mike Repole, said, according to the Wall Street Journal, that the deal laid groundwork for distributing BodyArmor internationally, including in China, which would ramp up his challenge to the market leader.

“To me, Gatorade is Blockbuster Video, and BodyArmor is Netflix,” he said in an interview. “If you don’t evolve, you’re not going to be around much longer.”

Repole has also had success co-founding and creating other brands including smartwater and vitaminwater, which joined the Coca-Cola portfolio in 2007.

Coca Cola said that the BodyArmor brand will continue to operate independently under the leadership of Co-Founder and Chairman Mike Repole and his BodyArmor management team.