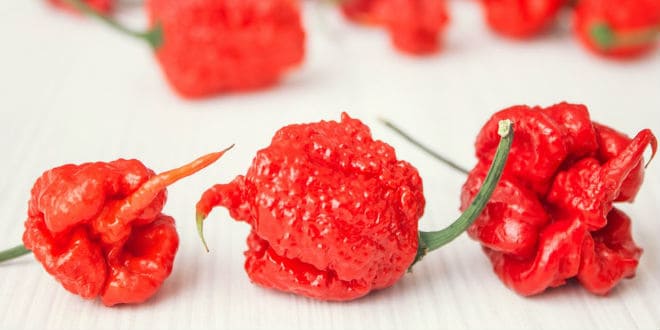 With recently lab-measured peak levels of over 2,189,000 SHU, Smokin’ Ed’s Carolina Reaper has, after the Guinness-required recertification, reclaimed its undisputed place at the top of ‘super-hot’ chili charts.

As the plant phenotype has further matured, Smokin’ Ed’s Carolina Reaper chili pepper has grown hotter over its prior world record and, unlike recent dubious ‘world’s hottest’ claims from other peppers, the Guinness recertification required the submission of rigorous third-party, scientific data to back up the new record.

More on the hottest chili pepper

Look for more information from Smokin’ Ed Currie and Puckerbutt Pepper Company on their award-winning achievement soon and at the NYC Hot Sauce Expo on April 21-22, 2018!

Ed Currie, the founder of Puckerbutt Pepper Company, grows more than 15,000 chile pepper plants at 30 sites in North and South Carolina, plus sites in four other states and at his home. According to an article published by the Los Angeles Times newspaper, Currie considers the location of the plots as state secrets for fear that competitors sneak in and steal their peppers.

The Insatiable Appetite for Mexican Food in the U.S.

It took 12 years of crossbreeding for Currie to reach the pinnacle of the pepper world, said the LA Times. He said he tested hundreds of hybrid combinations before finally crossing a “really nastily hot” La Soufriere pepper from the Caribbean island of St. Vincent and a Naga pepper from Pakistan to create Smokin Ed’s Carolina Reaper — “a tidal wave of scorching fire,” as the PuckerButt website puts it.