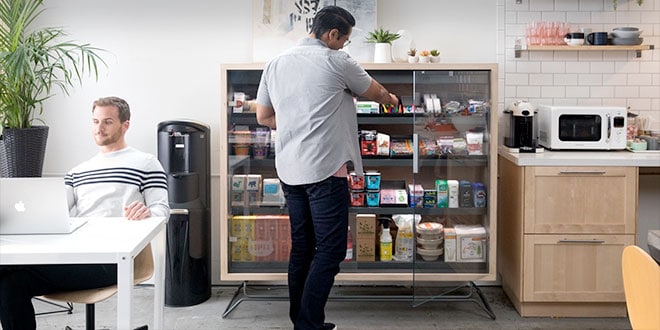 Social networks exploded in a wave of criticism and general rejection as news broke that a couple of former Google employees launched a business through a web application that would jeopardize the future of neighborhood stores. With the creation of an app that they named “Bodega”, they sought to make convenience stores, better known as traditional mom-and-pop stores, obsolete.

In a profile article done by Fast Company, named “Two Ex-Googlers Want to Make Bodegas and Mom-And-Pop Corner Stores Obsolete,” Co-Founder of Bodega, Paul McDonald, mentioned that eventually centralized shopping locations wouldn’t be necessary because there would be, “100,000 Bodegas spread out, with one always 100 feet away from you.”

The article quickly went viral and caused outrage on social media, with many defending mom-and-pop stores that are often run by immigrants or people of color.

“Bodega” sets up five-foot-wide pantry boxes filled with items you would pick up at a convenience store in convenient locations, such as gyms and dorms and buildings, by striking deals with property managers. They are like vending machines, only instead of having snacks, there are items like deodorant or Clorox. Users can unlock the box with an app and they’ll be charged for whatever the cameras record them taking. The logo for the app is a cat, referencing the animal that so often appears at the traditional corner store.

According to NACS, “Bodega” had been testing at 30 locations in the Bay Area to find out what shoppers needed, then used artificial intelligence to reassess the 100 most-needed items in that location. For example, in one apartment block residents might constantly buy toilet paper or sugar, in another they might buy pasta and cleaning products. “Bodega” employees regularly restock items.

“Bodega” Co-founder apologizes for offending anyone

In the article, McDonald told Fast Company he “wasn’t particularly concerned” about coming across as culturally insensitive and had surveyed the Latin American community, deciding it wouldn’t be a problem.

According to the Huffington Post, Frank Garcia, Chairman of The New York State Coalition of Hispanic Chambers of Commerce, which represents around 80,000 businesses, including bodegas and mom-and-pop restaurants, said that “this is sacrilegious, what they’re doing.” He added that his grandfather, who was a part of the Latin Grocery Association in the 1960s, would be “rolling over in his grave.”

Lin-Manuel Miranda, the creator of “Hamilton” and “In the Heights,” was another who reacted and praised those who criticized the controversial company on Twitter that threatened to eliminate neighborhood mom-and-pop stores.


McDonald responded to the heated backlash with an apology on the company’s blog, adding that he never intended to put corner stores out of business or disrespect them.

“Despite our best intentions and our admiration for traditional bodegas, we clearly hit a nerve this morning, we apologize. Rather than disrespect to traditional corner stores — or worse yet, a threat — we intended only admiration…. We’re here to learn and improve and hopefully bring a useful, new retail experience to places where commerce currently doesn’t exist,” McDonald wrote.