Home » News » Americas Food and Beverage Show: Stronger Than Ever 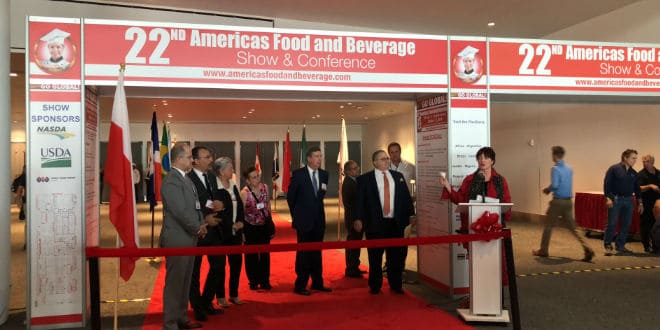 Charlotte Gallogly, president of the World Trade Center Miami, inaugurated the 22nd Americas Food and Beverage trade show on Monday at the Miami Beach Convention Center, with the presence of more than 400 exhibitors representing nearly 50 US companies and 13 other countries.

After a one-year break following the 2017 event cancelation, due to the danger of Hurricane Irma that threatened to impact the Miami Beach area, on October 1, the trade show was inaugurated in a new, larger room of the renovated Miami Beach Convention Center.

The chairman-elect of the Board of Directors of the World Trade Center Miami, Roberto Muñoz, also welcomed the retailers, producers and distributors of the food and beverage industry who came for business at the Americas Food and Beverage.

Muñoz pointed out that the celebration of this trade show honors the name given to Miami, “the gateway to the commerce and culture of the Americas.”

In addition to the large representation of Hispanic companies from Latin American countries, such as Peru, Argentina, Costa Rica and Colombia, 17 companies from several African countries are participating for the first time in the trade show that ends today, October 2.

About 10,000 people visited the Americas Food and Beverage show

“Another partner of ours, the Thai Trade Center, also brought some 20 companies from Thailand to the Americas Food and Beverage that have been busy doing business on this first day of the show,” Yendi Álvarez said to Abasto, Digital Media Manager at the World Trade Center Miami.

Despite a hot start to the business day due to failures in the air conditioning system of the Convention Center Lounge, which were solved in the afternoon, about ten thousand people, were visiting the great diversity of exhibitors in the food and beverage industry to do business or learn more about their products to establish future business relationships, according to Álvarez.

The Trade Assistance Center was also presented for the first time in the show, which was created to help companies establish contacts and also facilitate the meetings they need to do business. “We have the network and the database to assist them,” Álvarez said.