Home » News » Abasto Magazine Was Present During the Teleton U.S.A. 2016 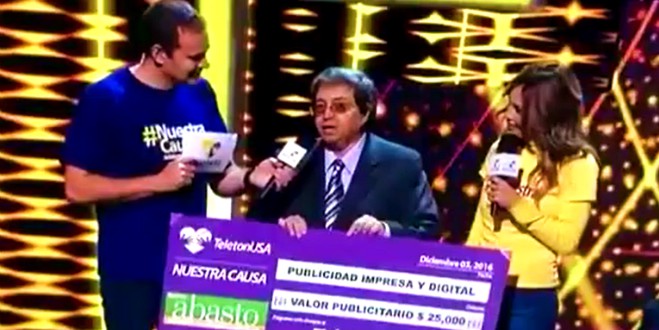 On Saturday, December 3, 2016, for the fifth consecutive year, Teleton USA’s mission to raise more than $15 million was met in the city of Los Angeles, CA. This significant amount of money will go towards the treatment of children with disabilities at the CRIT (Center of rehabilitation and Inclusion Children Teleton) rehabilitation center. Abasto Magazine was present during the event televised by Univision Network, donating a sum of $25,000 in advertising concept, as well as covered the event while being able to join some of their advertisers from the magazine that were there to join in the donation of this noble cause.

Some of the companies advertised by Abasto Magazine that were present at the event were Jarritos and Productos Alimenticios La Moderna S.A. de C.V., from where the Export Manager, Esteban Abascal, as well as the U.S Marketing Coordinator of the company, Arianna Avilés, were there to make their donation on behalf of the company.

Karla Martínez and Alan Tacher were the two co-hosts of the event that lasted more than 27 hours and had more than 30 celebrities who volunteered in answering phone calls, receiving pledges, as well as sharing moments with families who benefit from the work of CRIT.

Alan and Karla introduced the director of Abasto Magazine, Mr. Gustavo Calabro, during the delivery of the $ 25,000 check. Mr. Calabro addressed the audience saying, “It is an honor to be able to present this check to you, because we know the noble cause it aids for these children”, he also emphasized that, “Abasto, is committed to continually working and to explore new forms of links, repeating that Abasto is the only print and digital publication which supports Mexican companies as well as the rest of the Hispanic world to sell their products in chain retailers of the United States”

The evening was a huge success not only by a revenue obtained of more than $15 million but because it was able to fulfill its primary objective, which is to open our minds to the needs of these children through programs like Teleton.