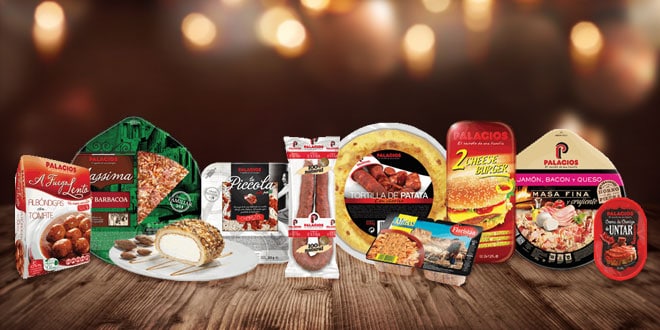 Palacios Group has announced the closing of two purchase operations, which reinforced the company’s position as a leader in the sector of Spanish foods. On the one hand, the group consolidates its leadership in fresh food with the acquisition of Precocinados Fuentetaja. On the other, Palacios reinforces its international presence with the purchase of the North American Elore Holdings Inc., which operates under the “Quijote” brand.

With these acquisitions, Palacios will achieve a sales level of more than $208 million and generate more than 25% of their turnover in international markets. The Carlyle Group (Nasdaq: CG) acquired the company in March 2015: to enhance the company’s growth from organic to inorganic; diversify the business through a greater international presence and other categories of prepared food, as well as reinforce its leadership in its main areas.

According to Pedro Domínguez, Managing Director of Palacios Group: “Both Fuentetaja and Quijote are leader brands in their respective markets, and it will allow us to raise our presence in North America, where there is a growing demand for quality Spanish products”.

“Both Fuentetaja and Elore have developed very solid businesses, whose success will be consolidated under the umbrella of Palacios”. “These acquisitions meet a number of our established strategic goals when The Carlyle Group invested in our company”, added the executive.

Fuentetaja is the leading producer of refrigerated Spanish tortilla, which markets both under its own brand and under the white label of the main food distributors in Spain, Europe and America. In addition, the company has presence in other categories such as refrigerated pizzas and other pre-cooked dishes and has two production centers in Segovia and Madrid. Since its creation in 1993, its sales have grown steadily and today it has an important international component. Palacios has acquired all the capital of the company in the hands of the Fuentetaja family.

Grupo Palacios is a family-owned butcher’s shop, founded in 1960. The company made a big leap forward in 1983 with the inauguration of its sausage factory in La Rioja (Spain). Palacios and its registered trademark is leader in Spain as manufacture and commercialization of chorizo ​​sausages.

Following the acquisitions of Fuentetaja and Elore, Palacios will open six production plants in Spain and one in the United States. Its products will be available in more than 25 countries.