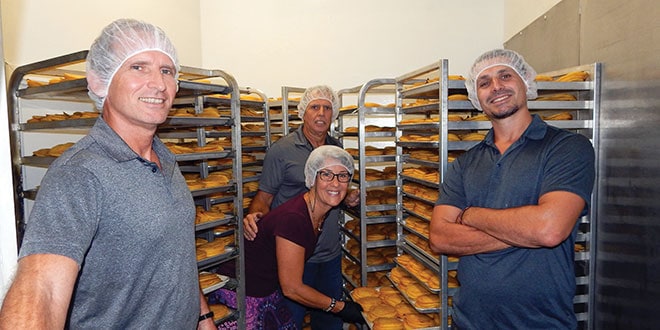 Rafael Sosa left from Venezuela to Miami more than three decades ago looking for a better future for his family, but he never imagined that making corn arepas with his wife Omaira would end up creating a successful company that now produces 70,000 units per day.

The success achieved by Sosa is due to the fact that he knew how to take advantage of the opportunities presented to him, many hours of work and specializing in the preparation of a natural and healthy product.

In a dialogue with Abasto Magazine, Sosa explained how the business of the corn arepa was born in Miami. “This is a product born in the eighties in East Miami, thanks to the idea of a Colombian and a Cuban who created this product to sell at street festivals. The “arepita” (or little arepa) began to sell like hot pancakes thanks to the consumption of the Colombian community during its early years.

When Sosa teamed up with the owner of the business and saw the potential for growth of the product, he proposed in 1995 to change the sales strategy, taking the corn arepas out of street sales at festivals to offer it to supermarkets and foodservice distributors.

The Venezuelan businessman says that it was at that time that he kept the business of the corn arepas and formed his company All Over International Foods.

Initially, the entire process was made by Sosa and his wife Omaira at home and prepared about 1,200 corn arepas a day.

“From that moment until today’s day, we have come a long way in the distribution for retailing with private label brands and our own. We have also reached out to all the food distributer services,” Sosa said.

To achieve the acceptance of his product among different groups of consumers, he carried out an aggressive tasting campaign. He offered it at public events and “the trick was to have everyone try it”.

But the biggest moment came when La Fe became interested in his product. From being a home business to becoming an industrial manufacturer was Sosa’s greatest milestone yet. “I saw the potential to propose Carlos Pena (former owner of La Fe), and I told him, why don’t we do the La Fe arepa and Carlos got excited, and sure enough we launched the La Fe arepa”, Sosa said.

With the support of this renowned brand (La Fe), Sosa’s business consolidated and the corn arepa made its name in the retail world. This helped them open more doors with foodservice distributors, Sysco being one of them. “This was the first time we had the product in the retail under La Fe’s brand and in the foodservice area with Sysco. From then on the snowball started rolling”, Sosa explained.

They now have a factory of 14 thousand square feet dedicated exclusively to the production of the corn arepa, which is a gluten-free product, 100 percent natural and with no additives.

Although the manufacturing system is automated, 24 people work in the factory. Achieving a prosperous and stable business, Rafael Sosa finally handed over the control of the company to one of his children, and now he enjoys a quieter pace of life exercising the functions of a consultant to the company.