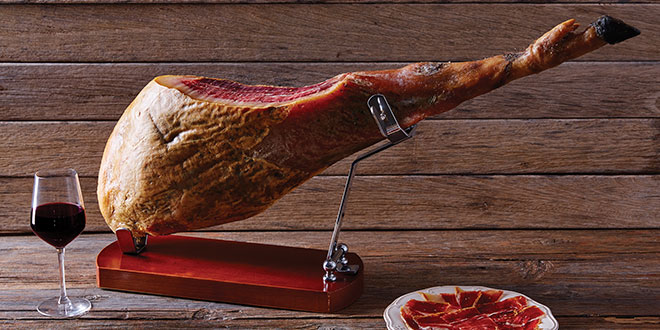 A recent study published by the National Association of Meat Industries of Spain (ANICE), revealed, for the first time, that the consumption of Iberian ham improves cardiovascular health.

Yes, the famous known “black-leg ham”, which correct name is “Iberian Ham” (referring to its race), stands out for the first time, not only for its value in the culinary and nutritional world but for its health benefits.

Iberian Ham provides essential amino acids, vitamins B, and vitamin E. It’s rich in iron, phosphorus, potassium, magnesium, and zinc. In addition, its high content of unsaturated fatty acids (oleic acid) is a valuable attribute of this product. Moreover, the fatty acids found in this ham act as powerful antioxidants because of their high polyphenol content. This is why sometimes it is associated with having similar the benefits as olive oil.

So far all these benefits were a hypothesis but after a study conducted by Dr. José Sabán, Director of the Endothelium and Cardiometabolic Medicine Unit of the Ramón y Cajal Hospital in Madrid, Spain, the scientific and statistical evidence yielded a positive result.

The study certifies that Iberian hams can be introduced into a person’s diet with no effect on weight gain or the incrementation in triglyceride levels. It also identified that the positive effects of eating this type of ham can last up to six weeks after consumption. The study also revealed that the body has “good memory” in terms of consumption of ham. Therefore, to include Iberian Ham in the diet in a regular and controlled way protects and/or improves health.

“The consumption of this ham is part of our culture, we have always known it is healthy, but now we are more than happy to be able to confirm it with this study and share it with the world”, commented Santiago Martín, president of Fermín Ibérico, the first brand to enter the United States with this product.

In both cases, in a controlled group, after consuming a regular portion of Iberian ham and Acorn Iberian ham, the following conclusions were reached:

So now the only thing left to do is to enjoy a piece of Iberian Ham with a glass of Cava and here is a toast for the health of everyone!

Doreen Colondres is a celebrity chef. Author of the book The Kitchen Doesn’t Bite. Follow her on Facebook and Instagram @DoreenColondres and visit www.LaCocinaNoMuerde.com , www.TheKitchenDoesntBite.com or buy her book on Amazon or iTunes.