Home » Healthy Lifestyle » Cooking in the times of the Bible 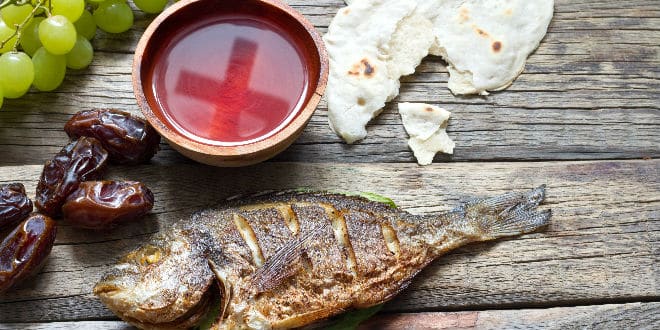 I always wondered what would be the recipes that were prepared in the times of Jesus and the Bible. So recently I accepted a trip to the spectacular land of Israel to answer my curiosity.

The history of the Bible begins with the act of eating. Adam and Eve prove it with the forbidden fruit in the Garden of Eden. But in the course of the stories, certain foods are spoken of, not only to nourish the body, but also as an element of holiness (Gen. 18: 6-7), dinners to close difficult covenants (Gen. 31:54), and even blackmail dinners, as when Jacob served his brother Esau, a stew of red lentils, described as pottage, in exchange for his family’s inheritance (Gen. 25:30).

The ingredients most mentioned in the Bible are: figs, grenadine, fresh fish from the Sea of ​​Galilee and the Mediterranean, dates, wheat, almonds, honey, laurel, coriander, saffron, mint , barley, sage, cumin, melon, grapes, goats, sesame, milk and cheese, bread with nuts, salt from the Dead Sea and even a bread called in Hebrew kikar, which it referred to a round bread, which is believed to be a type of pita bread (Exodus 29:23), among others.

The use of food to solve problems is also mentioned. Like when Abigail tried to resolve an argument between her husband Nabal and David. Abigail in record time went to buy wine, hundreds of bread, cakes with fig and meat to make a diplomatic dinner, calm the situation and not lose her life and that of her husband (Samuel 25:18).

In addition to the ingredients, the Bible talks about fasting, sacrifices during Easter and the symbolism of many of these ingredients. For example, bread was called the kings’ food and is even mentioned as the main course and even the value of the woman who was busy making bread all day, even if she did not eat it (Proverbs 31:27).

Olive oil is mentioned again and again. Both the field of olive trees, their leaves, their fruits and the process of pressing the fruit, is even associated with elements of positivism, light, peace, joy and even as a remedy for health (Isaiah 1: 6; Luke 10:34).

While wine, fortunately, is described in the Bible as a drink that makes life happy (Eccl 10:19) and makes the heart happy (Ps 104: 15). Israel has the blessing of sharing climates such as those of Greece, Italy, France and California, so the quality of its wines, to this day, remains excellent. I tried many that stole my heart, among them: Dalton Estates of Galilee and Clos de Gat, of the region of Judea.

One of the best dinners I’ve had in my life, was with the great Chef Moshe Basson, at his restaurant Eucalyptus in Jerusalem. This passionate Chef will make you feel all kinds of emotions, in a tasting dinner inspired by the ingredients of the Bible. His farm to table style restaurant was a simply memorable experience.

The culture of working the land, a good recipe with fresh products and the act of going to the table and enjoying dinner, as a symbol of love and peace, is something that Jesus also wants us to learn from Him.

Doreen Colondres is a celebrity chef. Author of the book The Kitchen Doesn’t Bite. Follow her on Facebook and Instagram @DoreenColondres and visit www.LaCocinaNoMuerde.com , www.TheKitchenDoesntBite.com or buy her book on Amazon or iTunes.