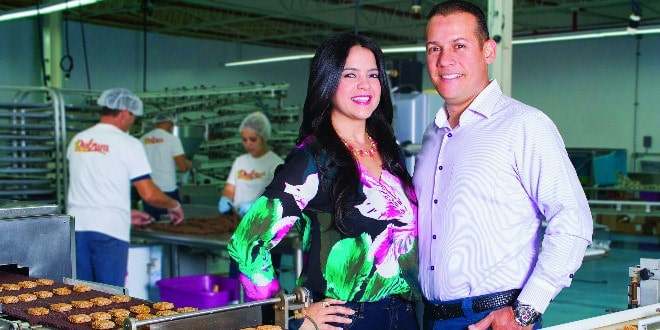 The fame of Dulzura Borincana has reached new heights, with even the Simpson family going to visit their manufacturing company in Moca, Puerto Rico, where Homer went crazy devouring the famous sesame bars that they produce there.

It’s not only these icon American animated series characters that talk about the quality and taste that characterizes Dulzura Borincana’s products. This fame has been reached through hard work, research and education throughout the last 20 years.

Carlos Rivera and his wife Carmen Rios, owners of Dulzura Borincana, acknowledge that their company’s success has been greatly due to their permanent interest in learning about innovation processes and staying up to date with consumer trends.

However, that courageous and ever-present Puerto Rican fighting spirit that even in the most critical moments, such as during the devastating hurricane Maria in September of 2017, has helped them and the 40 workers of their sweets and healthy snacks factory get ahead.

“When the hurricane happened, we were not in Puerto Rico, Carlos and I were stranded in New York and our first concern was that our employees and their families were safe and the second thing we thought was what we were going to do because we did not know if the factory was still standing. It was no longer about the two of us, but about 40 families who depend on us,” Ríos recalled.

Despite the great challenges that they faced with Hurricane Maria, Dulzura Borincana reactivated its operations within three weeks and have achieved exponential growth since then, opening new markets in the United States, introducing new lines of healthy snacks and obtaining recognitions, such as the MIDA Association Producer of the Year award and credentials for the quality of their sweets.

“We are the first Puerto Rican company to acquire the certification of Non-GMO products after a process of highly controlled audits,” Carmen Ríos told Abasto magazine.

Teamwork, communication and the integration of some of the staff allowed the company to take this project forward to produce products that do not come from genetically modified organisms (Non-GMO).

“When you empower your staff to have a responsibility, that gives them a sense of commitment and I think that has been the success of the implementation of the project,” said Ríos.

Dulzura Borincana is currently producing 20 different flavors of snacks in 40 different packaging models in the facilities of its 22,000 square-foot factory, which has the most advanced technology and has also been adapted to the specific needs of its snacks.

With their line of healthy snacks, the company is conquering the US market, but not simply for the quality of the product presentation. “Sweetness is a snack that tastes good on the palate but is also nutritious,” said Ríos.

Nationally, Dulzura Borincana is located on the shelves of Marshalls, TJMax, Home Goods and Ross stores. In Florida, they also opened doors in Walmart, Publix, Winn-Dixie stores, CVS pharmacies and Navarro, as well as in the main supermarkets in the New York, New Jersey and Maryland area.

When Abasto asked Carmen Rios on the secret to her company’s success, she responded, “I would say it’s like when you take a pot and put a lot of ingredients inside because afterwards, you have a very tasty meal. Success is a mixture of many ingredients, I would say that having a quality product, always staying innovative, studying, having passion and always putting the need of the consumer first, these are the ingredients that Carlos and I have used.”