Home » News » The World Cup Fever Increases Among Hispanics in the U.S. 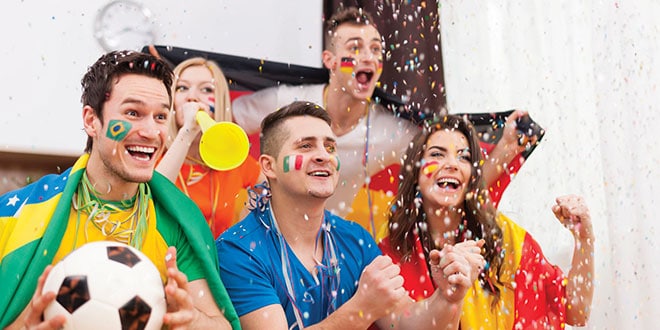 The 2018 FIFA World Cup Russia ™ will begin June 14 and Hispanic fans in the US are getting ready for the action.

Our new national consumer survey, ThinkNow Research: Study Among Hispanic Soccer Fans, found that 89% of Hispanics in the United States intend to watch the World Cup and seek to participate online and through their cell phones.

What makes a great fan?

Hispanics in the US self-define more as avid soccer fans 22% versus 11% non-Hispanic and are less likely to be casual fans. As enthusiastic fans, they see the pre-qualification matches (65%), consider the World Cup matches as an occasion to meet with the family (68%) and wait for it every four years (67%).

Hispanics in the U.S. are considerably more compromised with soccer activities online in the last three months, including:

Watching the World Cup outside of home

Fans are watching football more and more outside their homes. Hispanics in the US have an excessive rate of use of computers and mobile devices when they follow soccer.

In the past, the World Cup was watched live or was recorded to be watched later. Now, the trend is to watch the World cup on tv, computer, smart phone or tablet.

The largest online stadium in the world

On an international level, soccer is the most popular sport on Facebook and Instagram with three times more followers than any other sport. In addition, the 2014 World Cup final was the most talked about sporting event in the history of Facebook, generating 3 billion publications, comments and likes of football fans around the world, according to the company.

Everything indicates that 2018 will be even bigger. Two thirds (66%) of Hispanic fans in the US say that interacting with other people on social networks makes the World Cup experience more enjoyable.

There is a new playbook for marketers and advertisers looking to get involved with avid football fans during the 2018 FIFA World Cup Russia ™.

The coverage of soccer on Facebook and Instagram begins where traditional media coverage stops. It has been reported that 94% of sports fans on Instagram use the platform to see the personal side of athletes.

As we have seen with the recent coverage of the Olympic games, “the fans want to be closer to the action, to the athletes … They want the vision of the experts. As a result, generating constant, captivating and exclusive content has become the priority of a modern vendor,” Campaign Magazine reported.

Key points for vendors and advertisers to advance on during the World Cup:

Start with the measurement: The World Cup only happens every four years. What are your goals for commitment? Align your means with business objectives.

Be prepared when you do it: Hispanics in the US will also watch it live and will record to watch it later.

Time Zone Difference: Make sure your content is in first place when fans are eagerly looking for results after night games.