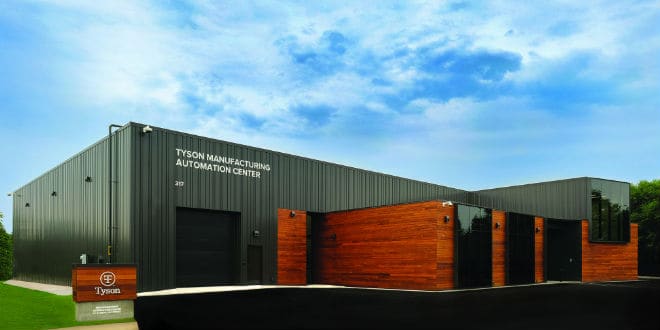 The center provides space for the development of new manufacturing solutions and collaboration with the company’s information technology team and equipment suppliers. It also serves as a location for team member training on new technology.

The development of new technology and processes will help improve efficiency and workplace safety.

“Innovation has been a fundamental part of our success for almost 85 years,” said Noel White, President and CEO, Tyson Foods. “This facility represents our commitment to creating the next generation of manufacturing solutions through advanced automation, robotics and machine learning.”

The company has invested more than $215 million in automation and robotics in the last five years.

“The key to TMAC’s success will be the collaboration of world-class talent bringing expertise from all aspects of processing,” said Doug Foreman, director, engineering, Tyson Foods. “Their skills and the resources within this facility will allow us to create solutions that will make a difference in the lives of our team members and create value for our business.”

Foreman will manage the day-to-day operations of the Tyson Manufacturing Automation Center with assistance from Marty Linn, who spent 34 years at General Motors, 18 of those as the principal engineer of robotics and the manager of advanced automation.

Tyson Foods employs more than 6,000 people in Springdale and more than 23,000 people in Arkansas, and contracts with more than 1,800 independent family farmers in the state, who grow chickens for its operations. The company estimates its annual statewide economic impact at nearly $2 billion.