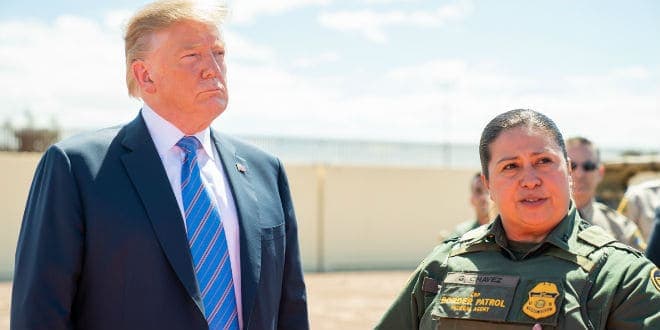 President Donald Trump warned Mexico that the U.S. would impose a 5% tariff on all imported goods from the neighboring country, beginning June 10. Tariffs will reach 25% until the Mexican government stops the flow of undocumented immigrants across the border.

Trump made the announcement on his Twitter feed: “On June 10th, the United States will impose a 5% Tariff on all goods coming into our Country from Mexico, until such time as illegal migrants coming through Mexico, and into our Country, STOP. The Tariff will gradually increase until the Illegal Immigration problem is remedied, at which time the Tariffs will be removed.”

The White House said in a statement that tariffs would be raised if the immigration issue persisted, with the charges set to increase even further if Mexico fails to take “dramatic action” to reduce or eliminate the problem. On July 1st tariffs will increase to 10%, August 1st, 15%, September 1st, 20% and October 1st, 25%.

According to CNBC, stock index futures tanked on Friday morning, as investors feared President Trump’s surprise threat of tariffs on all Mexico imports, amid a worsening trade war with China, could risk sending the U.S. economy into a recession.

Dow Jones Industrial Average futures indicated a drop of 258 points at the open. Futures on the S&P 500 were lower by 1.2%. Nasdaq futures dropped by 1.5%.

International markets also reacted negatively. The Mexican peso weakened against the American dollar, while shares of Japanese automakers fell because many of them have manufacturing facilities in Mexico, according to The New York Times.

Mexican President Andrés Manuel López Obrador responded to Trump in a letter, saying that he did not want confrontation, and that leaders have a responsibility to seek peaceful solutions to controversies.

Mexico is the largest foreign supplier of agricultural products to the United States, totaling $26 billion last year, according to the Office of the U.S. Trade Representative. Top categories among those imports included fresh vegetables, fresh fruit, wine and beer, and processed foods.

The U.S. imported $346.5 billion in goods from Mexico last year and for the first three months they increased 5.4%. At that rate there would be $365 billion imported in 2019.

Forbes contributor, Chuck Jones, wrote that Trump’s tariffs are about to trash the economy.

“At a 5% tariff companies (and it is companies and eventually consumers that pay the tariffs, not the exporting country as Trump consistently misrepresents) would have to either raise prices or take an $18 billion hit to profits”, wrote Jones.

The analyst said at the full 25% rate it would be a $91 billion impact to the U.S. economy. “While it would only be 0.4% of the total U.S. economy, that is a substantial portion of its growth rate which is running under 2% when you strip out inventory changes, trade and increased government spending. It is also 9% of the total $1 trillion increase in GDP from the first quarter of 2018 to the first quarter of 2019”.

In the statement release by The White House, Trump said “Mexico cannot allow hundreds of thousands of people to pour over its land and into our country violating the sovereign territory of the United States. If Mexico does not take decisive measures, it will come at a significant price”.

Mexican President sent an official delegation to Washington to begin discussions on how to “reach an agreement for the benefit of both nations.”