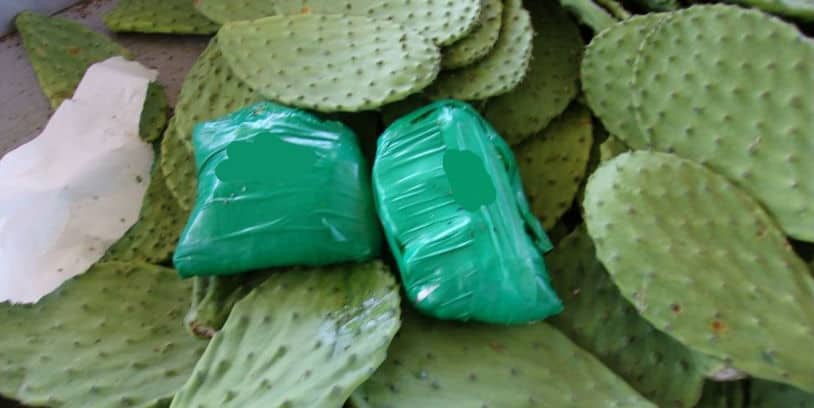 U.S. Customs and Border Protection officers working at the port of entry in San Diego intercepted more than $61 million worth of narcotics, including 668 pounds of methamphetamine hidden in a cactus (nopales) shipment, and almost 15,000 pounds of marijuana in what was supposed to be a shipment of limes.

On August 7, at about 8 a.m., a tractor-trailer arrived at the Otay Mesa cargo facility with a shipment manifested as cactus. According to the U.S. Customs and Border Protection (CBP), officers referred the shipment to be unloaded at the dock for an intensive inspection.

A CBP canine team screened the shipment, and the dog alerted to a pallet of cactus. CBP officers searched inside the crates of cactus pads (which are often used in nopales, or prickly pear, dishes and drinks) and found packages, wrapped with green tape, hidden inside among the pads.

In total, officers found 590 packages, containing about 668 pounds of methamphetamine. The narcotics have an estimated street value of over $1.5 million.

“International drug trafficking organizations will use whatever means they can think of to try and move their illicit shipments into the U.S.,” said Pete Flores, Director of Field Operations for CBP in San Diego. “CBP officers dedicate their careers to protecting our country by securing the border.  For them, these unusual seizures are all in a day’s work.”

Later that same day, again at the Otay Mesa cargo crossing, at approximately 6:30 p.m., CBP officers sent another tractor-trailer to the dock for further inspection after discovering anomalies during a scan by an X-ray imaging system.

Related Article: What Did CBP Find in Shipments of Broccoli, Ketchup, and Onions?

CBP officers opened the boxes and found large, tape-wrapped packages inside the many boxes manifested as limes.

Officers found 622 large, tape-wrapped packages inside the boxes, containing 14,880 pounds of marijuana. The narcotics have an estimated street value of almost $60 million, according to the CBP.

Meanwhile, CBP officers at the Pharr International Bridge cargo facility in Texas, hit it out of the park again with the seizure of another huge load of alleged methamphetamine worth $19,841,000 discovered in a commercial produce shipment arriving from Mexico.

“This is another significant strike our officers have made on the methamphetamine smuggling industry,” said Port Director Carlos Rodriguez, Port of Hidalgo/Pharr/Anzalduas. “Large seizures like this one underscore the severity of the drug threat and show that our officers remain fiercely dedicated to upholding our border security mission.”

A secondary inspection of the conveyance resulted in CBP officers discovering 521 packages of alleged methamphetamine weighing 992 pounds (450 kg) concealed within the floor of the trailer.

CBP OFO seized the narcotics, the tractor/trailer, and arrested the driver.