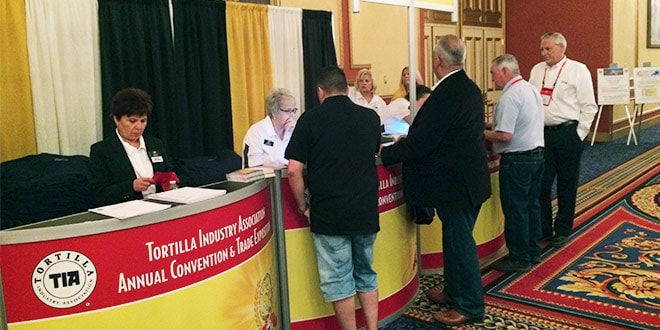 Tortilla consumption in the United States has grown rapidly due in large part to the increase in the Hispanic population in the country and the growing popularity of this product among non-Hispanic consumers. According to Jim Kabbani, president of the Tortilla Industry Association (TIA), this industry has grown at a rate of up to 10% in the last 10 years.

The tortilla sector, with sales more than $ 13 billion a year, has flourished over the past five years. This has made it the fastest growing segment in the bakery industry, according to an IBISWorld report on the production of omelet in the United States market.

Precisely, everything is ready for this industry to make its 25th annual convention, which annually brings together producers, suppliers and distributors from different countries.

The Tortilla Industry Association event, to be held May 1 and 2 at the Hotel Paris in Las Vegas, is expected to involve 85 exhibitors and attend more than 600 visitors.

According to Kabanni, this is a sign of growth that the industry has had in recent years.

“This time we will have 10 more exhibitors than last year and we are sure that the number of participants will be much higher compared to previous editions, thanks to the growing interest and consumption of tortillas in the country,” said Kabbani.

He also stressed that the Tortilla Industry Association Convention is the most effective way to participate in this industry and know the latest products, equipment, ingredients and regulations.

For attendees, the convention is a great opportunity to share with all the people related to the sector, strengthen relationships, as well as do marketing and business.

The attendees will be able to know the latest trends in the market and understand where the industry is headed. This will be thanks to the seminars, educational sessions and plenary sessions that will be held during the convention.

“We expect to see huge growth in sales, exhibitors, and attendees,” said Kabbani, adding that during the convention, attendees will be able to participate in interesting educational sessions and many entertaining activities.

For several years now in the United States the market for tortillas has exceeded that of bread for hamburgers and hot dogs.

In the United States, many of the population has changed their eating habits. For example, they have changed the sandwich by the wrap, which is wrapped in tortilla and shoots the business further.

However, Hispanics continue to mark the pulse of the market as the highest consumption is recorded on the West Coast where the highest percentage of population of Mexican origin.

However, says Kabbani, there has been a significant shift in the growth of the Midwest and Northeast markets.

As in previous years, Abasto Magazine is the only medium chosen by TIA to sponsor this important Convention.