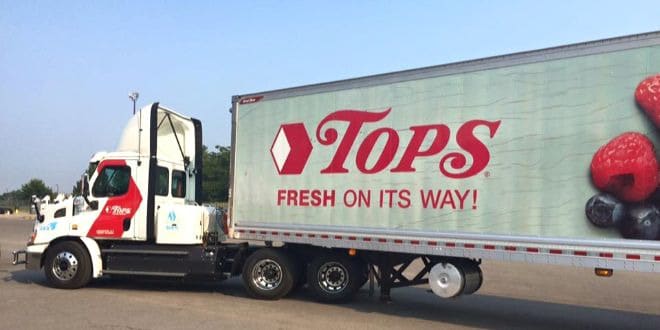 The U.S. supermarket chain Tops Friendly Markets filed for bankruptcy today, saying an unsustainable debt load, falling food prices and stiff competition from Amazon.com Inc. and other low-cost rivals forced it to reorganize, according to Reuters.

Morgan Stanley Private Equity bought Tops from Dutch retailer Koninklijke Ahold NV in 2007 for $310 million and Tops began to expand with this new acquisition, increasing from 71 outlets in 2007 to more than 150 by 2013. However, same-store sales began to stall and debt was used to help finance at least $375 million in dividends for its private-equity owners, according to Bloomberg.

With the buyout by Morgan Stanley and later by its own managers, New York-based Tops was left struggling with debts. In a court filing, Tops said “transactions undertaken by prior ownership” left it with unsustainable leverage, according to Reuters.

According to Tops, the 169 stores it operates in New York, Pennsylvania and Vermont will stay open, while it reconstructs and aligns itself under Chapter 11 of the U.S. bankruptcy code in White Plains, New York.

Following closely behind is Bi-Lo LLC, a subsidiary of Southeastern Grocers and the company behind the Winn-Dixie chain, which plans to close 200 stores and possibly file for bankruptcy as well, according to Bloomberg.

The supermarket chain is facing $1 billion in debt following Lone Star Funds acquisition of the company in 2005. According to Bloomberg last year, the company and creditors have had talks about a possible debt-to-equity exchange, as well as asset sales. Bi-Lo could prepare filing as soon as March, Bloomberg reported.

The grocery industry has always been competitive, full of challenges and changing trends. Both companies have faced challenges that include discounters, big box stores and online competitors such as Amazon, which bought Whole Foods last year to expand their grocery presence.

Traditional supermarkets have become a thing of the past. With so much technology and innovation, grocery chains are having to change the game and step up in order to stay relevant. For example, Kroger has completely embraced digital technology with their new Kroger edge technology and using mobile apps to shop. Walmart, Amazon and Kroger have all tested using cashier-free stores, instead having the customer use only a handheld scanner to make the checkout process faster. Amazon also released Amazon Go, a grocery store concept that involves no cashiers or cash registers.

Southeastern Grocers remodeled select stores and converted some of its Bi-Lo and Winn-Dixie stores to Harveys or its Hispanic chain, Fresco y Mas. According to Food Dive, Winn-Dixie has stood at second place to Publix in Florida for a long time and Bi-Lo operates vanilla stores that have struggled to stand against competitors.

Likewise, Tops was also facing strong competition in the Northeast. The chain also made updates and renovations to their stores, but the company struggled to keep up with competitors such as Walmart and Wegmans.

With online shopping and digital technology taking over the grocery and retail industry, the market has become more difficult for traditional grocers.