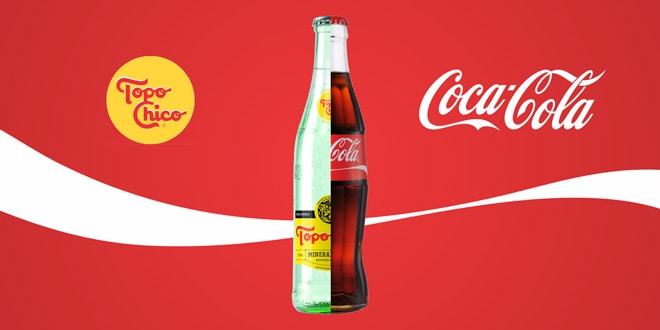 In order to expand and strengthen its nationwide presence in the bottled mineral water market, beverage giant Coca-Cola has bought Topo Chico, a renowned Mexican mineral water brand, for $220 million.

“It is highly satisfying for us to continue expanding the legacy and authenticity of Topo Chico Mineral Water on an international scale through this agreement, which will further enhance its presence in the U.S., adding tremendous value to the country’s product portfolio”, stated Manuel L. Barragan Morales, Chairman of the Board of Directors of Arca Continental.

In a press release, Arca Continental, owner of Topo Chico and the second largest bottler in Latin America, announced the transfer of the mineral water brand rights to the Coca-Cola company in the United States.

Topo Chico has a large tradition in Mexico, where it has been bottled at its factory in Monterrey for the past 120 years. They are produced in their plain or lemon flavored form in glass bottles and have recently been using 20-ounce and 1-liter plastic containers.

According to Forbes, close to 250 million bottles of Topo Chico were sold in the United States last year, but Coca-Cola still has a long way to go before the Mexican mineral water brand succeeds in overthrowing LaCroix as best-selling. However, with its influence in the market, Coca-Cola certainly has the power to introduce Topo Chico to a wider audience.

Every year, at a national level, $2.3 billions of dollars in bottled mineral water are sold, according to sales information from Information Resources Inc., a Chicago-based consumer market research firm.

“In this new stage of working together with The Coca-Cola Company, we will continue to bottle Topo Chico Mineral Water with the highest quality standards at the original plant in Monterrey where it has been produced for over 120 years, reinforcing the alliance between our two companies”, added Francisco Garza Egloff, Chief Executive Officer of Arca Continental.