Home » News » Which are the top three food and drink companies in the world? 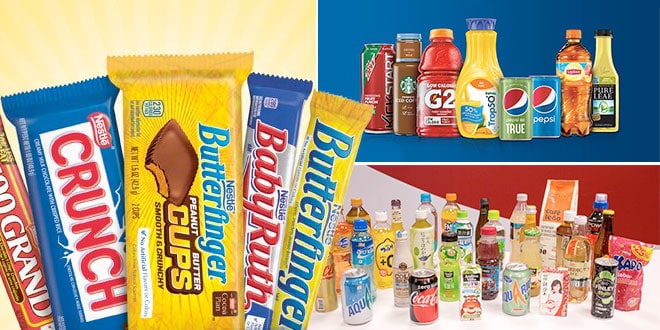 According to the 2017 Forbes Global 2000 report, Nestle SA, PepsiCo Inc. and the Coca Cola Co., are the top three food and drink companies in the world.

The companies are measured by a composite score of revenue, profit, assets and market value.

Despite a shift away from the consumption of sugar and “unhealthy products” worldwide, traditional packaged food, soft drinks and tobacco companies ranked high among the most powerful firms globally.

Forbes reported that Nestle continues its reign at the top of the food and drink companies; it dropped one spot to #34 on the 2017 Global 2000 but dominates the field thanks to the more-than $90 billion in revenue and $8.6 billion in profit it recorded for the trailing twelve months ending on April 7, 2017.

In response to rapidly changing consumer preferences, Nestle has led its food industry peers during a transformation period, as major industry players invest in startups and research and development (R&D) for more nutritional offerings.

Last November, Nestle announced its “groundbreaking” initiative that will reportedly slash sugar in chocolate by 40% without sacrificing taste.

The Other Two  World’s Largest Food And Drink Companies

Pepsi and Coca-Cola have maintained their places at the top of the food and drink companies. PepsiCo jumped six spots to the 84th position on the 2017 Global 2000, while Coca-Cola slipped three places to #86.

The jump came in part to its acquisition of the SABMiller’s 58% stake in MillerCoors: the deal, which was part of SAB’s divestiture efforts as it attempted to close its own merger with Anheuser-Busch InBev, closed in October and turned Molson Coors into the third largest brewer in the world.

The Forbes Global 2000 is an annual ranking of the top 2,000 public companies in the world by Forbes magazine. The ranking is based on a mix of four metrics: sales, profit, assets and market value.