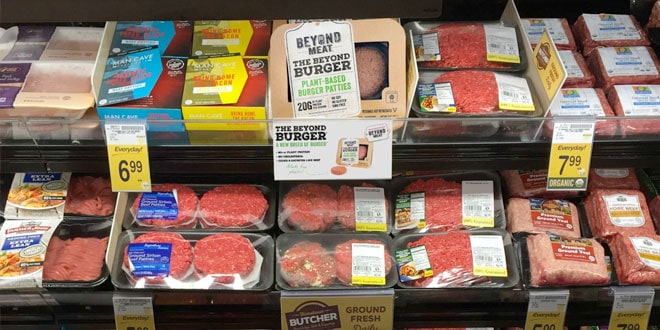 Beyond Burger, the veggie burger backed by Bill Gates, is moving from the frozen food aisle to the meat section of the Safeway grocery stores.

“At Beyond Meat, we are in the business of enabling consumers to eat what they love, in this case, delicious satiating burgers, while enjoying the health, sustainability, and animal welfare benefits of plant-based protein,” said in a press release Beyond Meat’s CEO Ethan Brown.

“Early research indicates that 70% of Beyond Burger consumers are meat-eaters seeking to incorporate more plant-based foods into their diet,” said Brown.

Beyond Burger could be a good substitute for meat eaters

As a major food purveyor, Safeway’s distribution of the plant-based Beyond Burger aligns with the shift in consumer preferences reported in a recent NPD Group study that showed more than two-thirds of meat eaters are substituting a non-animal protein in a meal at least once a week, and 22 percent saying they are doing it more often than a year ago.

The Beyond Burger is made from pea protein, yeast extract, and coconut oil. Looks, cooks and satisfies like a traditional hamburger. Is naturally cholesterol free and contains no GMO’s, soy or gluten. The burgers contain pulverized beets, which gives them their reddish color and juices so that they “bleed” and sizzle in the pan.

In stores, the burger is sold in packs of two patties for $5.99.

Based in Los Angeles, California, Beyond Meat was founded in 2009. Is a privately held company with a mission of building meat directly from plants.