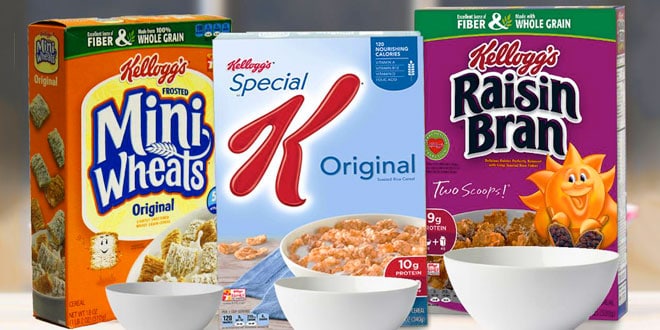 Kellogg Co., the cereal giant, began the closure process of distribution centers in North Carolina, Texas, Florida and Missouri, where hundreds of employees will be laid off.

The Michigan-based maker of cereals, snacks and breakfasts reported that the closures are due to the decision to leave its direct distribution network to implement the warehouse model, as a way to stay competitive.

In North Carolina, Kellogg is closing its Charlotte and Greensboro facilities, which have 483 combined workers. Closures are expected to be completed between late July and early August.

At its Weston, Florida facility, the 246 workers layoffs, are in two phases beginning July 8 for distribution center employees and Aug. 4 for “snacks retail execution” employees.

The company will close facilities in Houston and Fort Worth, impacting 421 total employees.

Kris Charles, a company spokesperson, told Fortune magazine that the company has talked with some of its large retail partners about hiring laid-off employees.

“As a result, we are optimistic that our employees will find similar employment once this transition is complete,” he said.

The company said the shift to the warehouse model would enable it to focus on revitalizing its snacks division, which experienced declining sales between 2014 and the first half of 2016.

“While this is the right move for the future of the company, it was a difficult decision because of the impact on affected employees,” said John Bryant, chairman and chief executive of Kellogg, in a February news release announcing the strategy shift. “We are doing everything we can to help our employees manage through this transition.”

In total, Kellogg plans to close nearly 40 centers nationwide, between late July and mid-August with cuts of more than one thousand jobs.