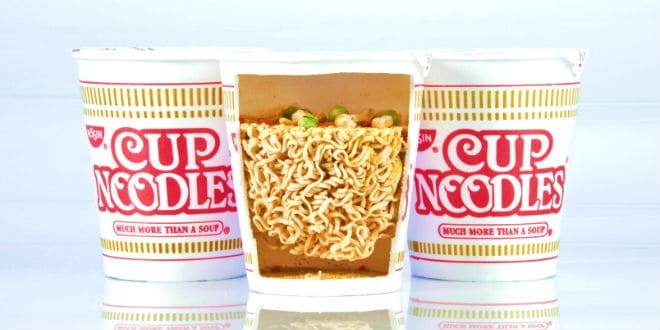 Cup Noodles, which brought instant ramen to America 45 years ago, said Thursday it has drastically reduced the sodium content and removed artificial flavors in its iconic foam cups, adding ingredients like paprika and lime.

American grocery shoppers have made it clear that less is more, from “gluten free” to “no artificial food coloring,” even when it comes to products like candy and instant dinners.

Owned by Nissin Foods USA, Cup Noodles made its way into the homes of low-income families and college dormitories because of its convenience and affordability.

In a statement, Nissin Foods said that consumers asked for these changes specifically and that it took extensive research and development to come up with the new recipes without hurting the taste or raising the price.

Last year, Kraft Heinz Co. removed the artificial colors from its classic blue-box macaroni and cheese. McDonald’s Corp. took out artificial preservatives from its chicken McNuggets earlier this year. And Mars Inc. is in the process of eliminating artificial food dyes like Red 40 and Blue 2 from its M&M’s.

“All food companies are reformulating the recipes of their brands in the hope of restoring consumer trust and improving the perception of quality for their brands,” said Rabobank analyst Nicholas Fereday.

Natural food coloring might not make the foods more nutritious or lower in calories, but it can boost sales.

Nissin’s push to give Cup Noodles a healthier bent started last year, when it made the cups larger and microwavable, encouraging people through an online ad campaign to add frozen vegetables, chicken, and shrimp to their ramen.