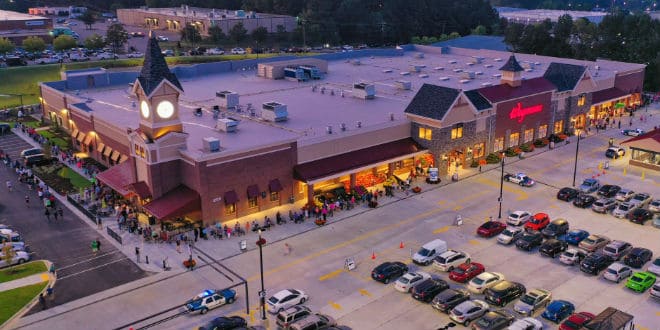 Aerial photo taken by The Drone Co Raleigh
Nearly 3,000 people lined up from early hours on Sunday, September 29, waiting for the first Wegmans supermarket in Raleigh and North Carolina to open its doors at 7 am.

Wegmans celebrated the opening of its 100th store by continuing to expand its supermarket chain now to seven states on the East Coast and breaking the company’s store-opening record, according to media reports, citing to a Wegmans spokesperson.

The 104,000-square-foot store is located at 1200 Wake Towne Drive, in the Midtown East Shopping Center in Raleigh, North Carolina and employs 475 people.

Cruickchank was one of the thousands of people who arrived before dawn on Sunday to wait for the supermarket to open.

In addition to more than 4,000 organic choices throughout the store, both fresh and processed, Wegmans Raleigh offers a variety of restaurant foods prepared by Executive Chef Rob Santiago and his culinary staff of 120.

“I’m excited to show people what we offer that’s not available here today,” Santiago said. “Family dinners can be tricky, and our customers will be able to come in and find something that makes everyone happy, whether it’s from The Burger Bar, fresh sushi, a made-to-order salad, authentic Italian pizza, a submarine, or anything off one of our hot and cold food bars.”

Wegmans plans to open five additional stores in the Raleigh-Durham area, including the West Cary location on Davis Drive opening in 2020.

Wegmans Food Markets, Inc. is a 100-store supermarket chain with 46 stores in New York, 18 in Pennsylvania, nine in New Jersey, 12 in Virginia, eight in Maryland, and six in Massachusetts. The family company, recognized as an industry leader and innovator, celebrated its 100th anniversary in 2016.

The Rochester-based grocery chain has been named one of the ‘100 Best Companies to Work For’ by FORTUNE magazine for 22 consecutive years, ranking #3 in 2019. The company was also ranked #1 for corporate reputation among the 100 most visible companies, according to the 2019 Harris Poll Reputation Quotient study.