Home » News » The Impact of Independent Grocers on the Growth of the U.S. Economy is Huge 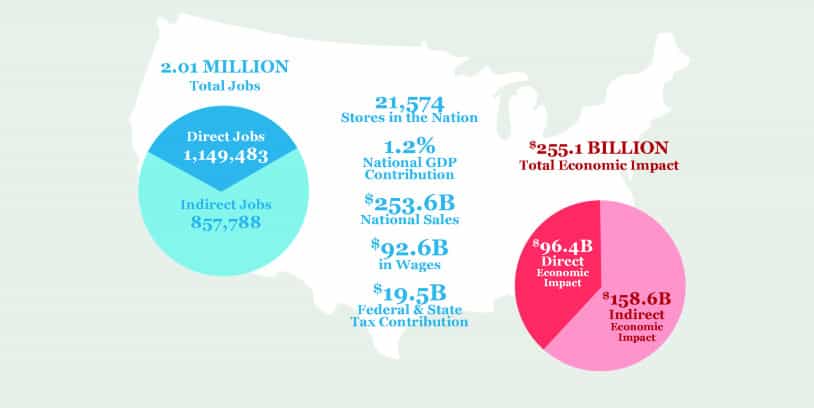 According to the latest economic impact study from the National Grocers Association (NGA), independent grocers play a key role in the nation’s economy, positively impacting the country via jobs, wages, and taxes.

Independent grocers are responsible for more than 1.1 million jobs (up from 944,200 in the previous study), earning wages approaching $39 billion. Wholesalers serving independent grocers provide more than 44,000 jobs that earn wages of nearly $3.3 billion.

“Not only are independent grocers at the heart of the community, but they are also at the heart of the U.S. economy, responsible for more than 1.1 million American jobs across thousands of communities,” said NGA President and CEO Greg Ferrara. “The continued strength and growth of the independent supermarket industry shows consumers are supporting local, community grocers who continue to innovate and bring value to the communities they serve.”

Sales increased to a little over $253.6 billion, from $131 billion, in the independent sector since 2012, the data year for the last study. During this same period, overall U.S. grocery store sales rose from $524 billion to $772 billion.

“Through strategic investment and planning, independent community grocers found themselves well-positioned to meet the intense demand placed on them by consumers during the pandemic and have proved themselves to be indispensable partners in their communities and local economies” Ferrara said. “Despite this growth over the past decade, independents appear to be losing a foothold in rural and inner-city low-income areas. NGA is working to reverse this trend through a comprehensive antitrust advocacy approach that would rein in growing power-buyer influence and encourage grocery investment in disadvantaged communities.”

According to the study, e-commerce also has driven sales as independent grocers have invested more in their online shopping platforms, which gave independents an edge during the pandemic. As a result, online grocery sales grew 54% in 2020 to nearly $96 billion, driving it to a 12% share of total U.S. e-commerce sales and 7.4% of all grocery sales.

All of this growth came during a period largely marked by food inflation. For example, between 2012 and 2020, food experienced an average inflation rate of 1.69% per year. In other words, food costing $1 in the year 2012 would cost $1.14 in 2020 for an equivalent purchase.

“This study is further proof that independent community grocers are crucial to feeding the nation’s pocketbooks as well as its bellies,” Ferrara said. The study was conducted for NGA by John Dunham & Associates. For more information and study methodology, visit www.grocersimpactamerica.com.