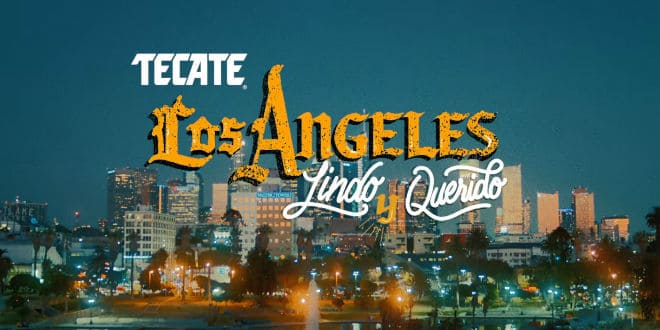 Born 75 years ago on the western borderland of Tecate, Baja, Mexico, Tecate embodies the unapologetic energy of Mexican-Americans in the USA. This Mexican Independence Day, Tecate has teamed up with Mexican-American musicians to help them share their own journeys through music.

Mexican-American artists, The Delirians, É Arenas, Katzù Oso, and Mariachi Lindas Mexicanas, created an original compilation dubbed “Los Angeles Lindo Y Querido,” that is a reflection of their bicultural identity inspired by one of the most popular anthems of love and loyalty to Mexico, “Mexico Lindo y Querido.”

The three individual tracks were also merged into a mashup track that highlights the individual experiences of each artist growing up in Southern California while paying tribute to their Mexican roots. Produced by Mexican music producer Ulises Lozano, the EP honors the Mexican-American community’s cultural influence on Los Angeles.

As part of the project, Tecate worked with Mexican-American Directors Cliqua (Pasqual Gutiérrez and RJ Sánchez) to create a music video of the mashup.

The compilation is now available via all streaming music platforms including Spotify, Apple Music and Tidal, with the music video posted in YouTube.

As part of the Spotify release, Tecate will also enlist local chapter of DJ collective and Instagram influencer Chulita Vinyl Club to curate a playlist representing LA Mexican American artists to encourage more consumers to get into the spirit of Mexican Independence Day.

Related Article: The Influence of Hispanic Heritage Month in the US

“Tecate is honoring and celebrating the Mexican-Americans who are breaking conventions, living life on their own terms, and redefining the US Latino journey. Our goal in this initiative is to give these Mexican-American artists a microphone to share their personal journeys through music, while putting a modern spin on a Mexican classic,” added Martinez .

To further amplify the celebration of Mexican-American heritage, as the official beer of boxing, Tecate sponsored the Jaime Munguia vs. Patrick Allotey boxing match that took place on September 14 hosted in Carson, CA.