Home » News » Sweet Potato: A Special Guest for the Holidays 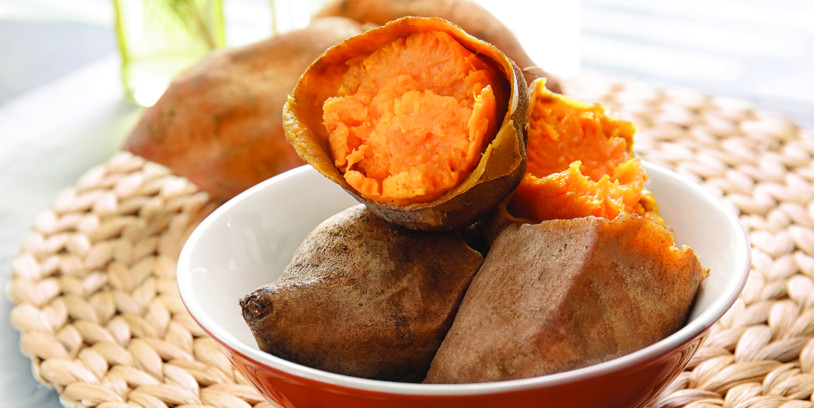 Article written by Paola Ochoa, AgTools.
The exact origin of the sweet potato has not yet been determined, but it is known that it is native to tropical forests and cultivated in Central and South America more than 5,000 years ago.

The sweet potato is part of the traditional diet of all Hispanics and can be eaten with or without the skin, baked, roasted, boiled, or grilled. In some homes, it is included in breakfast and snacks, replacing bread, or in main meals, accompanied by fresh vegetables and chicken, turkey, egg, or fish.

Mashed sweet potato has become a classic side dish during Thanksgiving dinners. Still, people with diabetes should not overdo it due to the high glycemic index of this tuber.

It is also a valuable source of vitamins B, C, and E and contains moderate levels of iron and zinc. Nutritionists are even analyzing its potential cancer-preventing properties due to anthocyanins present in the purple-fleshed sweet potato.

The drop in this volume is mainly related to the state of Louisiana, which has decreased its production in the last seven years by practically half. The decrease occurred during November when this tuber’s production was higher due to the high demand for the Thanksgiving celebration.

Within the United States, production is carried out throughout the year, but with an increase of more than double in the first two weeks of November. This is related to the demand for this tuber around the Thanksgiving celebration, as seen in the following graph.

On the other hand, Canada is the leading exporter of sweet potatoes to the United States. Shipping products constantly throughout the year, but with volume peaks in February and October, it is expected that this volume will continue to grow in the following years since the demand for this tuber is very stable.

And how does this affect the consumer? In 2021, the maximum national sweet potato price per pound was $1.12 in May, while the minimum price was $0.60 precisely during Thanksgiving week. This behavior has been present in the last seven years, where the higher volume in the market makes the price of this tuber more accessible to U.S. households.

As for sweet potato varieties, of the three main types consumed by Hispanics, the white variety was the best paid for the farmer in California during September, reaching $25 per 40-pound box. The same pack of the red and orange varieties barely got $22.

And as a curious fact, the sweet potato is considered a savior food. In China, in the last century, a typhoon devastated the rice crops, and it was thanks to the sweet potatoes millions of people were saved from dying of famine. In Uganda, in the 1990s, a virus devastated cassava crops, and this tuber became the basis of the inhabitants’ diet.

So, this holiday season, the sweet potato is a guest that Latino families should include on their dinner tables.